Strong, fearless, and just a loving nana with soft hands is how Dame Whina Cooper was remembered today at the unveiling of her new statue.

Hundreds gathered in the small settlement of Panguru at Waipuna marae to commemorate the late Dame Whina Cooper today with.

Prime Minister Jacinda Ardern, flanked by Dame Whina's children, was led down the urupā while being called by a series of karanga to the marae to unveil the statue. 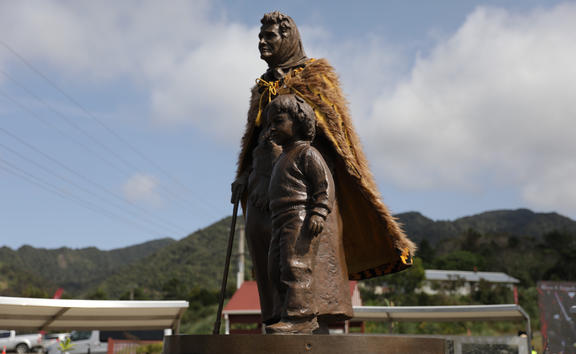 The statue depicts the famous photo of Dame Whina and her mokopuna, Irenee Cooper.

She said today was an emotional day for her and her whānau.

"It's a bit of remembrance of the march of 1975 and it's quite emotional acutally it's evoked a lot of what that meant to us in that time, and how it's still a continuing journey today."

Today many remembered her for leading the land march and for the gains she made in te ao Māori.

But for her moko, it wasn't just her fearlessness and strength that she remembers but just her nana.

"My memories are more of a warm grandmother with great, beautiful soft hands that used to share her glucose lollies with me. We always knew that she was an important wāhine in our family and very forthright, fiery and fearless. She's left that as a legacy for the women in our family."

Prime Minister Jacinda Ardern, spoke on the pae, a decision carefully thought through by the kaumātua at Waipuna marae.

Te Rarawa leader Haami Piripi said it was only fitting for a wāhine to stand.

"It was something that we thought long and hard about and decided that it was appropriate ... following in Whina's footsteps, it would certainly be appropriate. We have to reexamine our own tikanga. We have to progress with the times."

Ardern took the opportunity to call on wāhine to fulfil their leadership aspirations did and to remind those there to hold the government to account, as did Dame Whina did all those years ago.

Following in the footsteps of the leader herself, the annual protest from Waitangi, which left from Te Rerenga Wairua over the weekend, came to pay tribute to the woman say left them a legacy.

Their hikoi, along with some protesters from Ihumātao, were made to wait until the PM made her way to the statue.

Hīkoi organiser, Rueben Taipari says this was the time to confront the government.

"We still have differences with the government, and we feel it's inappropriate with the situation that Māori still have - we don't have our land returned, that we're still having issues around housing and our tino rangatiratanga and our sovereignty."

Rangatahi from Te kura kaupapa o Paki Taewhenua drove up from Auckland and joined the march over the weekend; they will continue on to Waitangi tomorrow.