Compass upping prices for DHBs by 5.5%

Hospital food provider Compass has increased prices for the district health boards (DHBs) that have signed up to its 15-year nation-wide contract - and is backdating the higher prices. 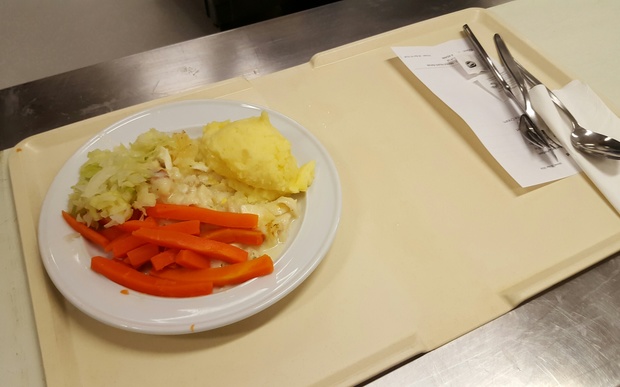 A meal served up by Compass at Dunedin Hospital on 28 April. Photo: RNZ / Peter Newport

Yesterday Checkpoint with John Campbell confirmed that the national contract only attracted six of the country's 20 DHBs, reducing total projected savings by over $100 million.

However, the low uptake also means Compass can increase prices for those that have signed up, and on 1 September, it did so - by 5.5 percent.

The higher price is being backdated to the start of July, and will be reviewed every year until the contract expires.

The Auckland, Counties Manukau and Waitemata DHBs were the first to sign up, followed by the Southern, Nelson-Marlborough and Tairawhiti DHBs.

Checkpoint asked those DHBs what they thought of Compass' increased charges.

All declined to be interviewed, and some referred Checkpoint to NZ Health Partnerships, the Crown agency tasked with finding cost-savings through national contracts for DHBs.

In a statement, Nelson-Marlborough chief financial officer Eric Sinclair said it was aware when it signed that the prices could go up.

"We were already contracting Compass at the time that we joined the national partnership. Even with the 5.5 percent increase, the cost to us is still lower that what we paid previously for Compass' services and the lower cost has enabled service improvement to our patients," he said.

Asked if he could intervene and cap the company's price increases, he said: "Overall, Compass is [still] saving the sector a considerable amount of money, about $30m, and that's going to go straight into frontline services."

He would not interfere if DHBs wanted to exit their arrangements with Compass, he said.

Under the national contract, Compass is able to review prices again each year until it expires, which means the amount of expected savings cited by Dr Coleman could fall further.

In 2013, before any DHBs signed up, the Public Service Association (PSA) raised this exact concern. In a submission to Auckland's three DHBs, the PSA had warned the price being offered could go up due to low uptake.

PSA DHB organiser Ashok Shankar said the 5.5 percent increase was exactly what they had been worried about, but the Auckland DHBs were determined to sign up.

"I can't figure out why they had such faith that it would happen, because we're not as close as they are to other DHBs, and we were getting indications that it wasn't going to happen," he said.

"The whole case that was put forward, was that the per patient cost of food was going to be reduced. Well obviously that's not going to happen."

Health Partnerships reiterated that the 5.5 percent increase was already factored into the revised $30-$40m savings target.

It said Compass could not arbitrarily raise prices whenever it wanted to, as it had also signed the contract.

A spokesperson for the agency pointed out that savings might also increase in coming years, as other DHBs had indicated they would consider joining when their existing contracts expired.

The spokesperson pointed to a satisfaction rate of 92 percent among patients eating the provider's food.