Hospital food provider Compass is having to renegotiate the contract it is offering to district health boards because so few have signed up. 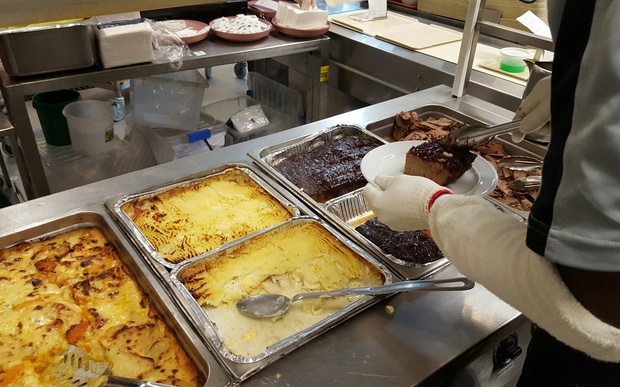 Some of the Compass-provided food on offer at Dunedin Hospital, during a tour of the kitchens on 28 April 2016. Photo: RNZ / Peter Newport

The projected savings that DHBs could make from signing up to use Compass was based on all 20 DHBs doing so.

But currently, only six have signed - and a memo to Health Minister Jonathan Coleman revealed Compass was now rewriting its offer in an attempt to convince more DHBs to sign up.

Compass' services are being pitched to DHBs through NZ Health Partnerships - an agency that acts on behalf of all health boards, and is tasked with saving money through economies of scale.

Compass was intended to be one such way. If all 20 DHBs signed up to its service, the sector could save between $155 and $190 million over 15 years.

However, six have given the deal an outright no - lowering the savings provided by the economies of scale.

That means - and Mr Coleman has agreed with this - that Compass might hike prices for the DHBs who had already signed up.

He also said the more DHBs that signed up, the less they would pay for Compass meals. 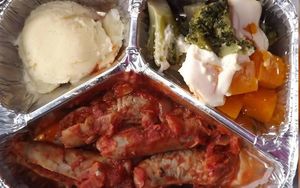 A photo of a Compass meal supplied by a Southern DHB volunteer, who said it was "incredibly salty" and "very watery". Photo: Supplied

NZ Health Partnerships was now trying get the undecided DHBs on board, and was rewriting its contract with Compass to make it more attractive.

The memo passed to Dr Coleman stated: "Health Partnerships will run a Food Strategy Session with DHBs, to look at how they can increase uptake of a nationwide contract.

"In addition, Health Partnerships is working with Compass to renegotiate the contract, to create a more holistic view of benefits, and derive improved value."

Until Friday afternoon, the Capital and Coast District Health Board (CCDHB), which covers the wider Wellington region, was one of the undecided DHBs.

An internal board document obtained by Checkpoint with John Campbell read:

"HPL (Health Partnerships Limited) continues to work to maximise benefits to the sector by encouraging the greatest level of participation possible.

"CCDHB has given clear advice to HPL that we have a sophisticated contract that includes a wider set of services than food, and that we wish to continue with current arrangements."

This afternoon, Capital and Coast DHB confirmed to Checkpoint it was turning down Compass' offer, making it the sixth DHB to do so.

The board chair, Virginia Hope, denied there was pressure on her DHB to sign up.

"I would just say it's a potential benefit that has been raised with us," Dr Hope said.

Health Partnerships said undecided DHBs had to make a decision by the end of this month.

It said it was working with DHB shareholders to assist their decision-making - and would recalculate savings based on the total sign-up, next month.

Then it would be known whether the DHBs that had already signed up would face a price hike. 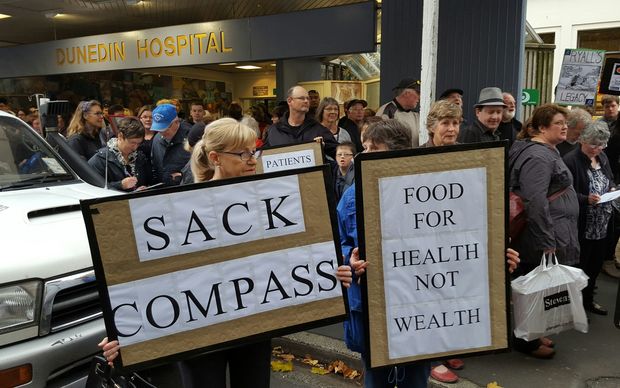 Earlier this year protesters in Dunedin turned out to call for the 15-year contract with Compass to be scrapped. Photo: RNZ / Peter Newport

That would include the Southern DHB.

The Dunedin South MP, Labour's Clare Curran, said opposition to Compass was vocal and ongoing - because people hated the food.

She said the DHB could end up paying more, for a worse product.

"That's not only highly embarrassing, but it's inept and incompetent.

Health Minister Jonathan Coleman could not comment because he was in Northland.