Review - The Power of the Dog

The Power of the Dog is a western shot in Otago that's already won Dame Jane Campion a Best Director award at the Venice Film Festival. 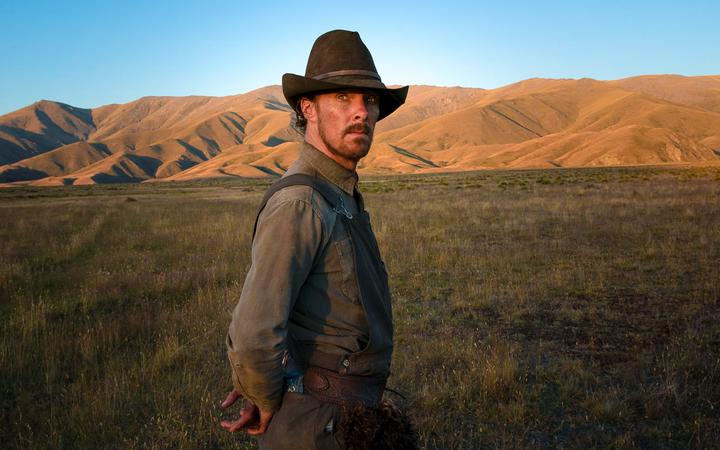 New Zealand can boast a number of world-leading filmmakers, but Jane Campion may have the edge, critically.

An Oscar, a Palme D'Or at Cannes, Best Director at Venice and dozens more awards over the years - it's no surprise she's so revered by her peers.

Many of her films reflect a complicated relationship with 'toxic masculinity' - and The Power of the Dog is that in spades.

Based on an old western novel, The Power of the Dog is about brothers Phil and George Burbank, co-owners of a big cattle ranch in Montana.

Phil - Benedict Cumberbatch - is a nasty piece of work from the start, with a line in vicious sarcasm. Brother George - Jesse Plemons - is more easygoing.

There are curious notes right from the start. Despite their mansion out in the prairie - great work from production designer Grant Major - the brothers seem to share a bedroom.

And despite Phil's strident homophobia, he seems to idolize his old mentor - now deceased - with feelings stronger than ordinary friendship, shall we say?

The prime object of Phil's derision is the widow who runs the local restaurant - Rose - and her son Peter, who shows signs of being creative - not something you want to admit to in Montana apparently.

Mother and son are reduced to tears by the taunts of Phil and his cowhands. But brother George steps in and not only comforts Rose but marries her. Phil is horrified.

As the name suggests, The Power of the Dog is based on status, reminding everyone who the top-dog on the ranch is. Phil gets it into his head that Rose has an ulterior motive in marrying the wealthy George.

So he feels both excused - and in some twisted way, morally bound - to break her down, maybe to force her to leave.

As played by Kirsten Dunst, Rose is easily broken down, particularly since new husband George is often away on business and unable to protect her.

She turns to drink - rather quickly, I would have thought - and initially doesn't notice that Phil is taking a suspicious interest in sensitive son Peter.

Peter is played by Kodi Smit-McPhee, who's been here before in another Otago-shot western - Slow West.

It's clear Peter's unhappy with the treatment Phil has been meting out on the increasingly vulnerable Rose, but there's no way he's a match for the bullying Phil. Or is he?

The Power of the Dog almost seems to revel in its narrative gaps. Why is Rose, who we're told plays the piano at the local movie house, completely unable to string two notes together when George buys her a piano?

Where does Rose's late first husband fit in, and what happens to second husband George for the later part of the movie? Why is Phil so furiously against George's marriage? Is it Rose in particular, or marriage in general?

The fact that the story isn't spelled out is one of the reasons fans of The Power of the Dog give for their enthusiasm. Already people are whispering "Oscar".

But for me, the allure of the film remained opaque, despite an enthusiastic performance from Benedict Cumberbatch - surely one of the few ex-Harrow cowboys to ride the range.

The music by Jonny Greenwood is good too - certainly better than Benedict's attempts at the banjo in this film. Leave it to the experts, Ben…