Iceland is a film-making minnow in Europe, though, like New Zealand, it prides itself on punching above its weight.

Audiences are familiar with its strikingly bleak landscapes in everything from the James Bond movie Die Another Day to Game of Thrones. And real-life White Walkers - the tenacious island sheep - featured in Icelandic film Rams, and this week a film called Lamb. 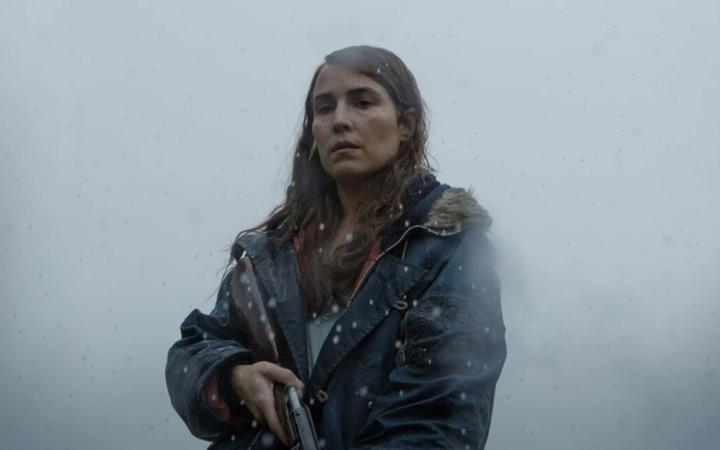 Any country whose biggest pop-singer is Bjork is likely to offer challenging movies. And Lamb is clearly going for gold.

This year it was hailed at Cannes for its eccentric novelty – this in a year that included last week’s Annette and the upcoming Titane, both of which redefine “novelty”.

Lamb opens on an ice-bound sheep-farm. Husband and wife, Ingvar and Maria, are the sole inhabitants. Apart from sheep, of course.

Spring arrives, and the couple make a start on their main job, helping sheep give birth to baby lambs. Star Noomi Rapace proves to be a real trooper by apparently delivering real-life lambs on camera. Then one particular lamb makes an entrance.

Maria immediately wraps up the lamb and takes her into the house. This seems to be a lamb that needs special attention, though their work is complicated by the behaviour of the lamb’s mother.

Why is the lamb – now called ‘Ada’ – being kept away from the ewe?

Years pass, and the couple have an unexpected visitor, Ingvar’s brother Petur.

His arrival has its own mysteries attached.  Why has he been away from the family farm?  Why is Maria so cool with him?  He’s certainly surprised when he sees Ada.

The trailer’s use of the old Beach Boys classic ‘God Only Knows’ isn’t quite what we’re used to either. Usually it’s used for its sweet, sublime tune. But here the lyrics are taken at face value.

Because Ada is not just a lamb. In fact, she’s being treated as one of the family.

The story of Lamb takes some selling, and that’s mostly down to a terrific job from star Rapace.  Rapace may be Swedish, but she seems to get Iceland – she spent a lot of time there when she was shooting Prometheus.

She understands how different Iceland is from the Scandi-noir films she made her name with, like The Girl with the Dragon Tattoo.

If Lamb is anything to go by, Iceland likes its stories primal, mythic and disturbing. It’s the sort of story you can imagine Vikings telling each other on an unending winter night.

Who – and what – is Ada? Where did she come from, and more important, who does she belong to?

It may have some of the trappings of a Nordic horror story, but it’s not quite that.  In fact, you start to wonder what exactly it is. Is this real? Is it horror fantasy? Is it all in Maria’s head? She’s clearly suffering from recent grief.

And when it comes to its unpredictable end, Lamb certainly offers something we didn’t see coming, though maybe we should have.

When a film comes from a country as icy and remote as Iceland, and the script is written by a chap with an unpronounceable single name who used to write lyrics for Bjork, perhaps you should expect the unexpected.

This takes the old nursery rhyme “Mary had a little lamb” to its logical end, I suppose.