We don't normally talk about television comedy on this programme, but I feel like I owe you something lighter and at 32 half hour episodes, I do feel that you'll be getting your lockdown money's worth with this one.

We got the DVD of season one as a wedding present and loved it but had no easy way to watch the rest until it turned up on Netflix earlier this year. 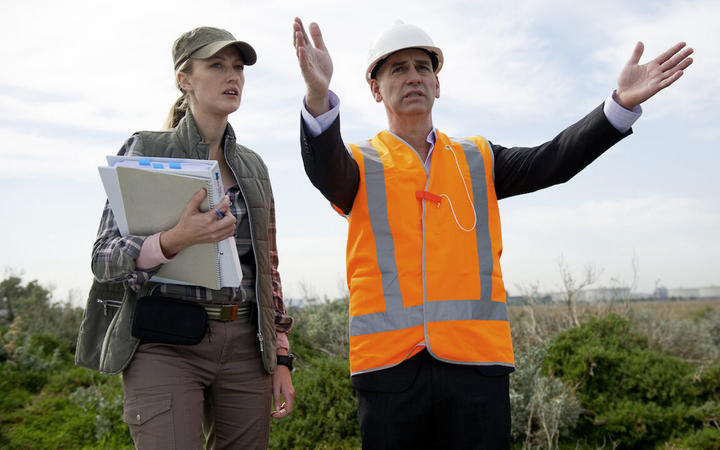 Utopia is produced by Working Dog Productions who have been a fixture in the Australian comedy scene for nearly 30 years, and responsible - if that's the right word - for the classic films The Castle and The Dish and the TV comedies Frontline and The Hollowmen.

Amazingly, the writing and directing team of Rob Sitch, Santo Cilauro and Tom Gleisner with producer Jane Kennedy have been working together since the mid-80s when they formed the D-Generation breakfast radio team and on the evidence of Utopia they're still going strong.

It's their job to cut through the red tape that prevents big infrastructure projects from happening, bypassing the Nimbys and getting buy-in from the stakeholders. That sort of thing.

But as is so often the case, their efforts are thwarted time and again by incompetence out of their control.

So, there's much gold to be mined from Australia's fairly inflated sense of its own importance and the self-interested politicians and political and media advisors derailing projects like fast trains or cross city tunnels or a second Sydney airport.

On another level, it's also like a family comedy - with Sitch in the role of the put-upon dad who never gets his way surrounded by wacky characters who won't do what they're told.

But at its heart it's a classic workplace comedy, getting much mileage out flaky wi-fi, office recycling, new security systems and the mysteries of HR.

Working Dog have been following much the same format for decades now. Utopia feels very like Frontline did in 1994 only it is honed to a razor-sharp edge now.

The pace is superb and the jokes come thick and fast, so much so that we will often be laughing from beginning to end - I don't make that claim lightly.

One reason for this is that the ABC has no commercials which means the rhythm of the show doesn't depend on those six-to-eight-minute arcs that constrain a lot of American situation comedy. And there's usually a solid main story as well as a secondary story in each episode which makes it more like Dad's Army - the high watermark for television comedy in my eyes - than something like Home Improvement.

For the last couple of months whenever we've felt like we needed a palate cleanser after a heavy drama or even a big day, we've gone to Utopia and haven't been disappointed.

Utopia is rated 13+ and all four seasons are streaming on Netflix now.