Waiting for Anya is an adaptation of a book by Sir Michael Morpurgo. Set in Occupied France, a village woman played by Anjelica Huston protects a group of Jewish children, hoping them to smuggle them to safety over the Spanish border. 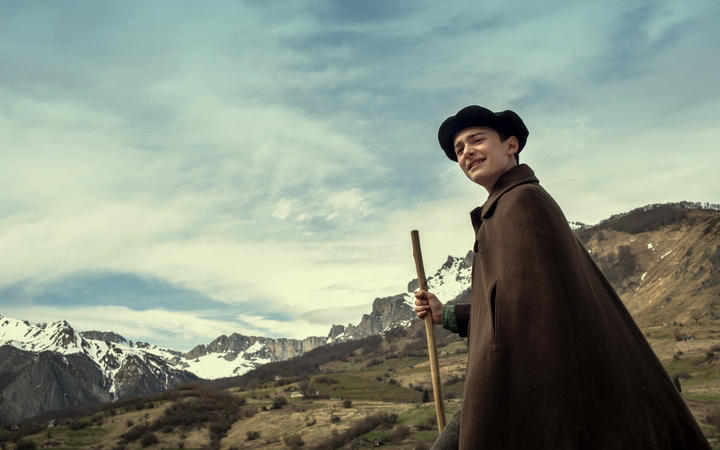 Prolific English writer Morpurgo is best known for his World War I novel War Horse – or rather the stage play it inspired, and the slightly less successful film version, directed by Steven Spielberg, no less.

Another novel Waiting for Anya, takes place in the Second World War.

On one platform, a few rural, village types are waiting for their train. Pan to the other platform where dozens of Jewish families are being herded into cattle-trucks. Among them are a father, Benjamin, and his 10-year-old daughter Anya.

When the German troops are distracted, the father begs the passengers to take Anya to safety, and one finally does. Unnoticed, Benjamin flees south to a small village near the Spanish border.

There we meet young Joe, who works as an errand boy. He delivers groceries to the reclusive widow Alice up in the hills. A widow with a locked-up barn.

The best thing in Waiting for Anya is veteran star Anjelica Huston, whose slightly otherworldly, aristocratic presence is perfect for the old woman with a secret.

Huston’s slightly hobbled by the fact that she has to adopt a French accent. This seems a bit unnecessary, since surely everyone is speaking French. The reason becomes clear shortly afterwards.

For some reason – probably financial – most of the cast are played by French actors.

And it was decided it was easier to get Anjelica and young American lead Noah Schnapp to sound French than it was to get an English accent out of the proudly Gallic Jean Reno.

It doesn’t take Joe long to learn Alice’s secret.  She’s harbouring Jewish children – and also runaway dad Benjamin from the first scene – with a view to smuggling them over the Pyrenees as soon as the coast is clear.

But the coast is far from clear. Despite Southern France being nominally independent of German invaders, that myth gets shattered with the arrival of troops sent to prevent Jews escaping to neutral Spain.

Alice and Benjamin keep the children hidden, while Joe regularly sneaks supplies up to them, under the nose of the Nazis.

Realizing that so far this is hardly an original storyline, Malpurgo added the Waiting for Anya twist.

Benjamin will take the children over the mountains, but he’ll always return. He’s sure that his daughter Anya will come and be reunited with him in this little village.

I can only assume that the novel makes this more convincing than the film does.

I know you want to know where exactly Jean Reno fits into all this. Eh bien, mon ami, he plays young Joe’s extremely French grandfather.

When he’s not sneering at the German invaders, he’s making sheep’s eyes at the glamourous Huston. What could possibly be the outcome here, is a question on nobody’s lips?

Waiting for Anya is based on some real-life heroics, which is why it’s a shame it’s only average as a movie. In fact, some of the acting struggles to even reach average.

But the justification appears at the end, with the real-life, chilling statistics of just how many Jews were murdered, and how many – surprisingly – were saved by real-life Alices and Joes.   I urge you to stay to the end, if you see the film.