Edgar Wright’s documentary The Sparks Brothers has had a limited release so far in this country.

That might change, however. The group Sparks has become an overnight success – again - at Cannes this week with their own film, a musical called Annette.

Sparks – brothers Ron and Russell Mael – have had several overnight successes over the years. And each time they’ve picked up more obsessive fans. 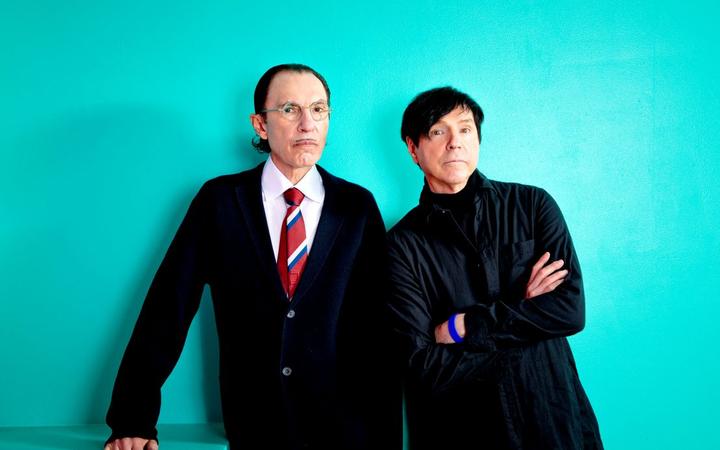 The screening of the film I went to was a full house, with an age range of about 40 years.  As someone who jumped aboard the Sparks bandwagon in the mid-Seventies, I wondered if this town was big enough for all of us.

The Mael brothers grew up in California, of all places. But they never sounded as if they came from anywhere specific.

They’ve recorded nearly 300 songs, and sound like nobody else – though it becomes clear they’ve influenced dozens of subsequent acts – from Duran Duran and Weird Al Yankovich to Taylor Swift.

Their career took off when they left the US – the one country that seemed resistant to Sparks’ unique charms – and set up shop in Britain, who absolutely loved them.

Their first appearance on British television – heavy pop on the bottom, tricky Gilbert and Sullivan melodies on top – set the scene, largely because of how they looked.

Pretty-boy singer Russell Mael fluted in falsetto, while brother Ron Mael was a sinister presence at the piano.

The idea of a Marc Bolan type on vocals, with Adolf Hitler on keyboards might have been dismissed as a one-off gimmick, if the music hadn’t been so arresting.

The single – ‘This Town Ain’t Big Enough For The Both Of Us’ - and the album Kimono My House – the Maels love puns - were sensations in 1974. But this was just the start.

I was fascinated by The Sparks Brothers – apart from anything, I think it was the first time I’d ever heard Ron and Russell Mael talk.  But I should have known, they talked very well.

Russell was always the front man of the group, while Ron wrote the songs – and the lyrics were as much a part of the group’s appeal as their unique sound and look.

Director Edgar Wright went to a lot of trouble to get Sparks fans together, and they’re an enthusiastic and diverse bunch.

Interestingly, many of them are British, underlining the fact that they were always far bigger in Europe than they ever were at home in America.

I’ve always liked Sparks, but my enthusiasm pales into insignificance compared to that of my Matinee Idle colleague.

Phil O’Brien’s obsession with the group and their albums – titles include A Woofer in Tweeters Clothing, Angst in my Pants and Gratuitous Sax and Senseless Violins – threatens to make that of Wright seem like a passing whim. Phil approached The Sparks Brothers with some trepidation.

He needn’t have worried. Fifty years on, the brothers are as endearingly quirky as their albums, and Wright’s direction of his first - and possibly only - documentary matches them for smarts, for laughs and for cinematic sensibility.

Yes, it was initially made for Sparks fans. But the story is so unpredictable and engaging that, even if you’ve never heard of Sparks before, I think you’ll warm to it too. Marc Bolan meets Adolf Hitler – what’s not to love?