Gunpowder Milkshake is a good example of a film cobbled together at an international market.

The key ingredient is what movie hustlers call “elements” – commercial plot ingredients, name actors, money from countries with good tax breaks - all adding up to a magic, secret number that means the project gets the green light. 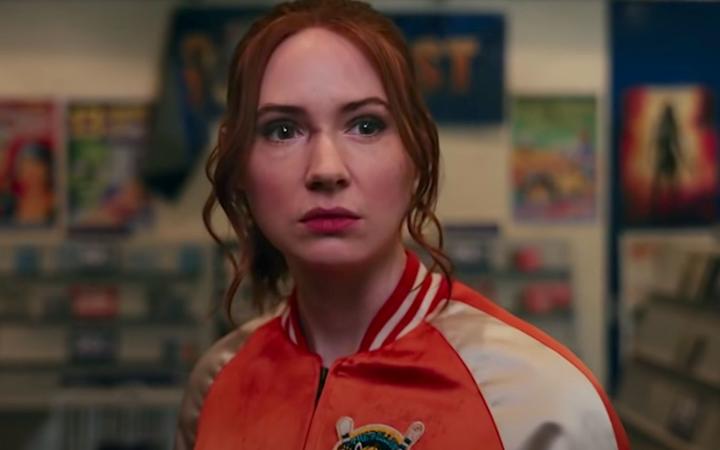 In this case the elements were a plot stolen from Quentin Tarantino and Zach Snyder, likable leads Karen Gillan and Lena Headey, a Kiwi camera ace and a writer-director with the gift of the gab and, apparently, no shame.

The name Gunpowder Milkshake is an accurate indication of what to expect. There are three elements to it - first “gunpowder”. That implies plenty of explosive violence, while the word “milkshake” suggests a blend of things that may not be good for you but are easy to swallow.

And the third element, of course, is that it’s absolutely meaningless.

Let’s meet our heroine Sam, played by Scottish actress Karen Gillan, whom I love.  She was not only the best Dr Who companion in living memory, but she was easily the best thing in the entertaining Jumanji movies.

So, I won’t hear a word said against Gillan, even if she plays a brutal assassin, who collects her guns tucked away inside large books.

Sam the assassin has been contracted by Paul Giamatti, working for the shady Firm.

Remember when Paul Giamatti was good?  He looks like that was a very long time ago.

Anyway, Sam hunts down her prey, only to be side-tracked by the appearance of one 8-year-old kid too many.  Sam tells Giamatti that she’ll do anything for the Firm, but she won’t do that.

So the Firm – a group of sinister guys in business suits with no lines – indicate that all the assassins on their books should be summoned to take off after Sam with extreme prejudice.

If ever Sam and her 8-year-old sidekick needed some unexpected help it’s about now and it’s Sam’s long-lost mother Scarlett, played by another popular actor, Lena Headey, best known as the villain of villains in Game of Thrones.

Scarlett’s been lurking in the shadows – there are a lot of shadows in Gunpowder Milkshake, thanks to Kiwi DOP Michael Seresin – looking after Sam from a distance.

But mother, daughter and 8-year-old Emily are not only on the run from the Firm. There’s another criminal cartel without even a generic name like “The Firm”.

Their boss took exception to some previous mayhem visited on them, and wants to take off after Sam with extreme prejudice, blah blah blah.

Fans of the original Office may recognize the boss as the obnoxious Finchy. Ralph Ineson will probably never shake that part off, no matter how many trashy films like Gunpowder Milkshake he makes.

You’ve probably noticed the best thing about Gunpowder Milkshake is the cast.

Watching Karen Gillan and Lena Headey work together, pretending they’re in something good, is an admirable tribute to the human spirit. And the three librarians also do whatever’s needed to get through to payday with the minimum fuss.

The worst thing about Gunpowder Milkshake of course is everything else. And far be it from me to hide the guilty parties’ light under a bushel.

And producers Andrew Rona and Alex Heineman – well done for getting Netflix Germany and France to cough up.

We’ll never know what might have happened if all these resources had gone on something better.  Is this honestly the best Hollywood could do with Lena Headey, Michelle Yeoh and Karen Gillan?

We can only wonder what currently idle directors like Kathryn Bigelow, Lone Sherfig and Stephen Frears might have done with them.