Two gay school friends - Eddie and Amber - pretend they're going out together in the quirky Irish comedy Dating Amber​.

I say "popular" - she seems to have made a successful career starring in TV series that I seem to have missed like Catastrophe and This Way Up.

She's fine in Dating Amber, by the way.

Dating Amber centres on a schoolboy called Eddie. He finds himself regularly picked on by his classmates for not chasing after available girls like Tracy with sufficient enthusiasm.

What's the matter, is he gay or something?

But it's Eddie's classmate Amber who attracts our attention - the punk outsider played by a young actress called Lola Petticrew.

I have very fond memories of Lola as the buttoned-up teenager in another Irish comedy, A bump along the way.

Amber is almost the complete opposite of that role. She's stroppy, she's sick of being called a lesbian all the time, and she has a bright idea of how to deal with it - and solve Eddie's problems at the same time. 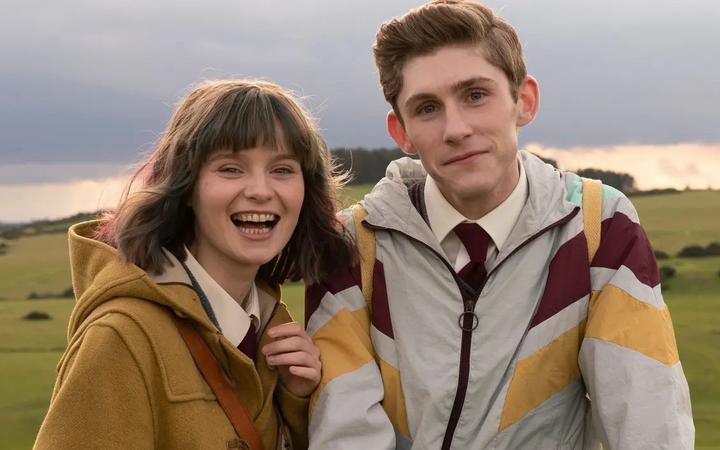 At first, the slow-in-the-uptake Eddie gets the wrong end of the stick when she suggests a hookup.

This is just a pretend relationship. They're both going to be each other's alibi - or "beard" - meaning a couple passing as straight.

Eddie's in denial, but in the end, goes along with it. It's just for a year, and it does make his life a lot easier.

Setting the action of Dating Amber in the early '90s,  Amber can't wait to head to the big city - any big city. She wants to work on a trendy, punk 'zine, where they've heard of riot grrl bands like Bikini Kill.

People are all over…. Shouldn't be bass-players?

On the other hand, Eddie feels pressured to live up to the example of his soldier father. Despite everything, Eddie is planning to join the army - a career he's singularly ill-suited to.

Meanwhile he and Amber continue to put on the show of the Most Heterosexual Couple at the school.

The fact that they get away with this for so long - how stupid is everyone in this film? - is one of Dating Amber's failings. The other, ironically, is the appeal of the two lead characters.

This is a story of admitting who you are, of not living a lie, of saying it loud, you're gay and you're proud.

But the two leads - Fionn O'Shea as Eddie and Lola Petticrew as Amber - are so appealing together, that we're reluctant to break them up in favour of other, more realistic relationships.

I was reminded of a rather better TV series called - to save your blushes - The End of the Effing World.

Like Dating Amber, it was about a wildly mismatched pair. But unlike it, it realised that, mismatched or not, we liked them together.

Dating Amber, paradoxically, might have been better if it hadn't been so attractively cast.

And if we hadn't been spoiled by so many romantic comedies that would have found a way to keep them together whether they liked it or not.

And on that rare campaign against a happy ending, it's time to go.