Review - Antoinette in the Cevennes

The French romantic comedy Antoinette in the Cevennes might be a good one if you're missing Europe or have a thing for donkeys, says Simon Morris.

Simon Morris: There are two sorts of film festivals. There are the prestigious ones inviting the best movies from all over the world to Cannes, Venice and New Zealand's International Film Festival. And there are showcases for the most popular films from one particular market - like the recent French Film Festival.

This year, the star performer was Antoinette in the Cevennes.

The film was an official selection for the Cannes International Film Festival, but it's primarily intended for the local market.

It stars TV favourite Laure Calamy as a school-teacher having an affair with the married father of one of her pupils - very French! And it assumes you know where and what "the Cevennes" are.

The "where" is easy enough. It's a national park in the South of France where people often go for 6-day tramps.

Certainly Antoinette's lover Vladimir is doing that. He's just not doing it with her. He's doing it with his wife Eleonore and their daughter Alice. Boo!

But the Cevennes are also well-known - in France at any rate - as the location of a famous journey by, of all people, Robert Louis Stevenson. The Scottish novelist wrote a book about it called Travels with a Donkey in the Cevennes. 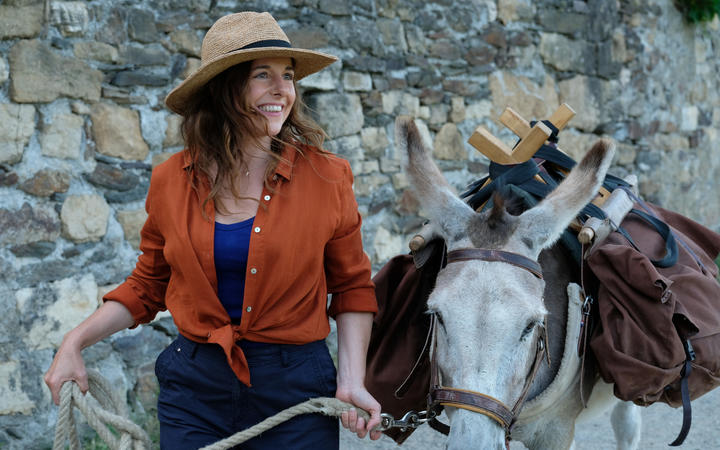 Which is why Antoinette in the Cevennes was nearly going to be called My Donkey, My Lover and I, until it was changed back under pressure, presumably, from people like me who were unfamiliar with the original.

Antoinette takes it in her head that she's going to hunt down Vladimir and his family on their travels, which is either very romantic, or borderline creepy, depending on how tolerant and French you are, I suppose.

Certainly, Vladimir doesn't seem to think it's very romantic when he suddenly runs into Antoinette at his first stop-over.

Far from being delighted to see his mistress at a family holiday, he tells her to stay away.

Now all this could easily become predictably French-farcical if it weren't for Antoinette's four-legged friend Patrick.

Unlike most of the travelling companions who think you can follow in Stevenson's footprints without having to go the whole hog or rather the whole donkey, Antoinette disagrees.

Antoinette has read the book and thinks there's only one way to travel in the Cevennes, and that's with donkey.

So what with a pig-headed ass called Patrick, a negative boyfriend, and a wife who has strong suspicions that Antoinette's arrival may not be totally coincidental, there's plenty of room for Gallic fun.

Unsurprisingly, Antoinette in the Cevennes - by writer-turned-director Caroline Vignal - was a huge hit in France.

It's frothy, it's naughty, it's got a charming donkey and an endearing lead performance by Laure Calamy.

It may be a bit too French for some tastes, but if you're missing your annual trip to Europe, or you have a thing for donkeys, this may be a decent substitute.