When the credits roll on this latest animated feature from Pixar, you'll feel a little bit better about life, says Dan Slevin.

Luca is as sweet and good-natured as anything I've seen in a long time and I can pretty much guarantee that when the credits roll - I almost said 'leave the cinema' but that's not happening in this case - when the credits roll, you will feel a little bit better about life, the universe and everything.

Jacob Tremblay is the voice of Luca, a sea monster that inhabits a picturesque little Italian bay- with an island off the coast that is not unlike Tapu Te Ranga in Island Bay in Wellington - a sea monster that lives happily with his family, herding schools of fish and avoiding the terrifying and mysterious human monsters above the surface who inexplicably want to kill them.

But Luca is a curious young monster and is intrigued by the human detritus that he stumbles across on the ocean floor. When he meets another young sea monster Alberto - voiced by Jack Dylan Grazer - and learns that they can take human form up on the surface he just can't help himself. Just like little Nemo in Finding Nemo, he disobeys his parental instructions and sets off on an adventure.

These early scenes are so beautiful and nostalgic - at least for my generation who as kids seemed to spend eternal summers roaming the neighbourhood unsupervised, getting into mischief. Luca, the film, gets those kid relationships - the ebbs and flows of them - perfectly right and they are the best part of the film.

Eventually, they find their way into the town of Portorosso, fall in love with a red Vespa and - with the help of local human girl Giulia (Emma Berman) they enter the town's version of a triathlon. Cycling, swimming and - because the contest is sponsored by a pasta company - eating.

I'll confess that - like so many of Pixar's films - the actual plotting sometimes fails to live up to the wonderful premise and all of the character and context but it doesn't matter too much. There's some drama there: envy, betrayal, danger but these little monsters aren't trying to save the planet from a computer killing death ray, they just want to find out who they are and have some fun in the process.

The writer and director of Luca, Enrico Casarosa, grew up in the same region of Italy where Luca is set, near Genoa, but even though I've not seen anything in his bio to suggest that he is, in fact, a sea monster, there is plenty about Luca that feels autobiographical.

He made one of Pixar's more enchanting short films in 2011, La Luna, about a boy going to work with his father and grandfather for the first time, sweeping fallen stars off the surface of the moon. You can find all the great Pixar shorts on Disney Plus and they really do hold up as lovely examples of the animator's craft. 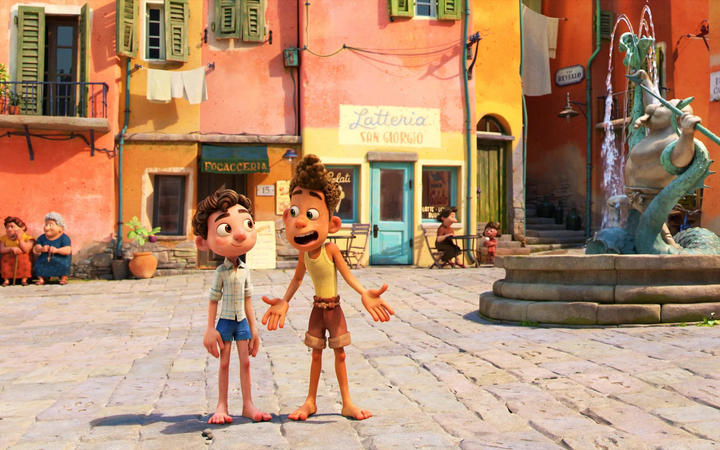 Also notable in Luca is the score by Dan Romer, if you listen carefully you'll hear the resemblance to his brilliant music for Beasts of the Southern Wild back in 2013. Such a different sound and, no disrespect to the man, it's nice not to hear Randy Newman again.

One small flaw - might not be such a small flaw for you if you are Italian - is the Pixar reliance on, shall we say, easy cultural tropes. They are warm-hearted stereotypes, but they are stereotypes all the same.

Luca made us laugh and sigh with recognition and the design - especially the bright colours of the countryside - are just gorgeous. Miyazaki greens and blues my wife said, and the film has been compared with Studio Ghibli and, while I don't 100 percent agree, that is very high praise indeed.

Finally a shoutout to Sacha Baron Cohen for his cameo which, when you consider almost the whole picture was made during lockdown he probably quite literally phoned in.

Luca is rated PG for Mild Themes and it's streaming now on Disney Plus.