In motorsport, F1 is the very top of the tree. It's the most glamourous, the best-funded and - frankly - the fastest. After F1, there's only one way to go and that's down.

What, then, are we to make of a film that tries to sell us that it is the peak of its franchise, the fastest of the furious, the biggest and the best but then it goes and calls itself F9 - 8 runs short.

Yes, the latest instalment in the Fast & Furious franchise which began in 2001 is called F9 but even that's inaccurate. If you take into account the 2019 spinoff Hobbs and Shaw as well as two short films, F9 should probably be called F13! But then, logic and common sense have never really been a franchise priority so why start now.

F9 starts with a flashback. To 1989 and one of those oval racetracks that the Americans love. The young Dominic Toretto - played here thankfully by a real actor the Kiwi Vinnie Bennett rather than a digitally de-aged Vin Diesel - is in the pits watching his dad Jack race. On the verge of victory, a competitor manages to flip Jack's car up in the air in much the same way that an American traffic cop in the news the other day flipped the car of a pregnant woman who he thought was too slow to pull over.

In this case, however, Jack's car turns into a giant fireball and Dominic becomes fatherless.

In the present day, Mr Diesel's Toretto and his current partner Letty (Michelle Rodriguez) and his little boy Brian are - as they so often are in these pictures - trying to live a quiet life off the grid leaving their stunt-ridden days of adventure and mayhem behind. It can't last though, eh? The old crew turns up with a recently decrypted emergency signal about a secret military plane crashing in a fictional South American jungle with a special cargo on board. Can they go and retrieve it?

Letty can't wait but Dom is reluctant. For about thirty seconds. Presumably, he finds a babysitter for little Brian because before you can blink, he's at the airport in his signature Dodge Charger. It remains unexplained how he manages to find one of these in every location he ends up in, from Edinburgh to Tbilisi. 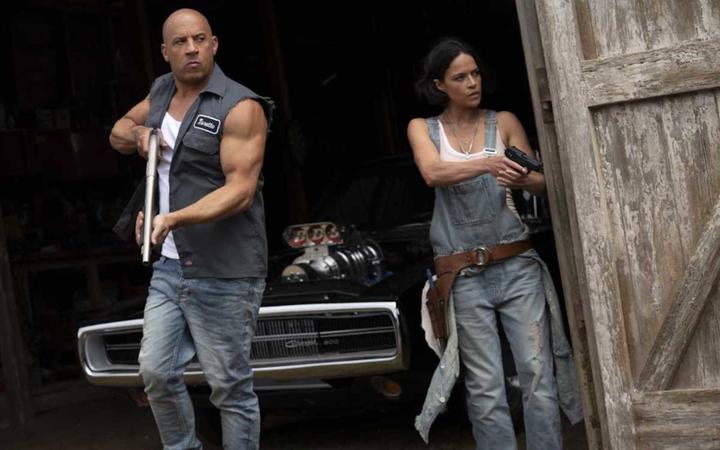 The Macguffin in this case is one half of a device that could take control of every computer in the world. All the holder needs is the secret key, access to a special satellite and the other half of the device wherever that may be. So, not that big a problem that our crew failed to retrieve their half of the device thanks to the intervention of a mysterious super-criminal who escapes thanks to a plane with magnets. Not the last time that magnets are going to be an important part of the plot here, friends.

The mysterious super-criminal just happens to be …

Who until this point - 13 films I remind you - we have never heard of before. John Cena plays Jakob, who was also in the pit crew on the day that Toretto senior bought the farm in such spectacular fashion.

There's a term that literary critics have used and it now applies mostly to these big multimedia franchises - retconning or retroactive continuity. That's where a story will simply rewrite the facts of an existing story to suit the needs of a new one. This isn't quite the same as - as far as I recall - no one previously in the franchise has said that Dom doesn't have a brother but, please, come ON. Later on, the film also resurrects a character that has been dead and mourned for quite a few films, all in the service of sentimentality and a desire to see the old band back together again.

It's insulting but also kind of sweet.

On the journey around the world and then into space, we meet a few more old friends including Charlize Theron as the supervillain Cipher and Helen Mirren a chirpy cockney jewel thief Queenie, doing her best impersonation of Barbara Windsor from Eastenders.

The best thing about having Vin Diesel's long-lost brother turn up is that he played by John Cena who, let's be honest has more screen charisma in his little finger than Diesel has in that hairless frame of his. Cena is one of those former wrestlers that the camera loves and it's clear from his one-note pursed cat butt lips that Diesel didn't go to that WWF finishing school that produced Cena, Dwayne Johnson, and Dave Bautista.

For all its ludicrousness - and its Ludacris for that matter - F9 isn't actually very funny, certainly not as funny as it likes to think it is. But it is stupidly entertaining big-screen fun - the kind of thing we have been starved of for too long. I enjoyed it a lot.

F9 is rated M for Violence. It's restoring the fortunes of multiplexes all over New Zealand now.