A single mother in contemporary Dublin tries to protect her family by building a house.

British director Phyllida Lloyd is probably best known for her blockbusting work on two Mamma Mia! films - crowd-pleasing and bank-pleasing at the same time. Or maybe you recall her coaxing a distinctive impersonation of Margaret Thatcher out of Meryl Streep in The Iron Lady?

But she actually made her name in the UK theatre scene, directing classics like Brecht and Weill's The Threepenny Opera and contemporary operas like Poul Ruder's adaptation of Margaret Atwood's The Handmaid's Tale in 2000 among others. In 1999 she took Mamma Mia! - one of the first jukebox musicals - to a triumphant West End season followed by a slew of awards and then on to Broadway and more awards.

Her new film, Herself, is quite different to anything she's put on screen before. It's a gritty Ken Loachian social drama about escaping domestic violence but even here she manages to give the kitchen sink a lyricism and, dare I see it, romance that Loach rarely gives into.

The script is by the lead actor, Clare Dunn. She plays Sandra, a young mum who we see being viciously beaten by her husband in the opening scene. I should warn you that - much like real life - the attack comes out of the blue and is absolutely horrific, not least because Sandra's little girl Emma (played by Ruby Rose O'Hara) is a witness to it.

Escaping at first into a shelter and then into emergency housing, Sandra finds it almost impossible to get her life back on track. The dead-end jobs don't pay much and the housing shortage in Dublin is much like our own. Long queues for the good rentals and concrete cancer in the bad ones.

Meanwhile, her manipulative husband Gary - a chilling Ian Lloyd Anderson - is pulling out all the stops to try and get her back.

The only bright spot on the horizon is Peggy, a retired doctor whose physical frailty means Sandra comes into clean - a job her late mother used to do. Cleaning up after Peggy is more like home help than just doing the hoovering. Peggy is played by the formidable Harriet Walter, a classical actress of some reputation and who played Brutus, Henry IV and Prospero - sometimes in a single day - in Phyllida Lloyd's trilogy of all-female Shakespeares for the Donmar Warehouse. Those productions also featured Clare Dunn so it's a little bit of a Phyllida Lloyd repertory company on display in Herself.

Desperate for a home to call her own, Sandra sees a YouTube video about building your own house for not much money. Peggy offers her a corner of her generous back garden in which to build such a thing and all involved have to agree to keep it a secret so that the social services won't dock Sandra's benefit and the dangerous Gary won't try and enact some form of vengeance on her and the kids. 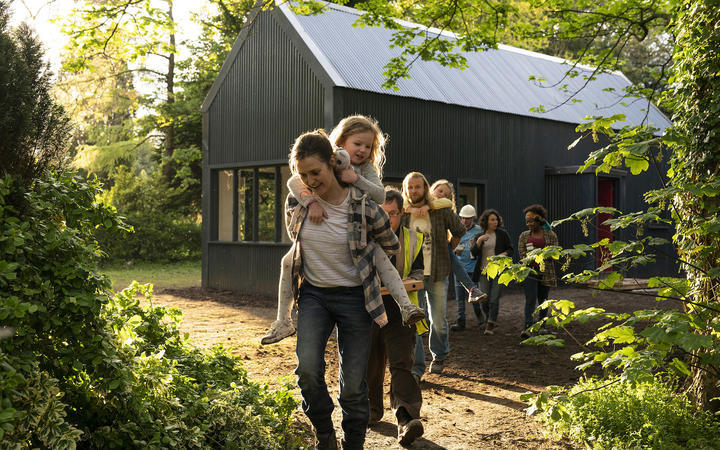 And even with all the willpower in the world, Sandra still needs a bit of help to actually build the thing and a stroke of luck helps out there, too.

She manages to enlist the help of a former builder, now a handyman, played by Conleth Hill from Game of Thrones and a bunch of other allies come and help out on weekends.

This is the kind of feel-good, up-by-your-bootstraps, feminist self-discovery story that sends audiences away feeling good about themselves, except it doesn't quite turn out the way you would expect.

The real world - in the form of the government bureaucracy and Gary's lawyers - see to that.

It's a tricky balancing act. Too far down the track of the confronting and rugged issues-based drama and you risk the audience turning away. It could become too much. But when the script populates the supporting cast with unusual 'characters' who seem to have been cast so they can be relief the film risks going too far the other way. The tone wobbles around a bit.

Holding it together, though, are the family. Dunn as Sandra is perfect, as you might expect from someone who co-wrote the script. The two young daughters are tremendous - convincing when they are happy carefree little moppets but also as traumatised and vulnerable primary school children.

And Harriet Walter is a rock at the heart of the picture, despite being a bit underwritten. There's no vanity there, just steel underneath the frailty. She's who Sandra will probably become when she's forged in this fire and she can truly discover her own strength.

Herself is rated M for Domestic Violence and Offensive Language and is playing in select cinemas across New Zealand now.