Review - In The Heights

The rise of the current king of the Broadway musical, Lin-Manuel Miranda, has been spectacular.  It’s impossible to overstate the importance of his show Hamilton, in which the story of the United States’ founding fathers was turned into a hip hop spectacular.

But Miranda had already smashed through the old guard’s glass ceiling with his first show In the Heights.

In the Heights borrows from an old American tradition. It’s a story about New York’s immigrant community trying to make its mark, a staple of everything from West Side Story to The Godfather. 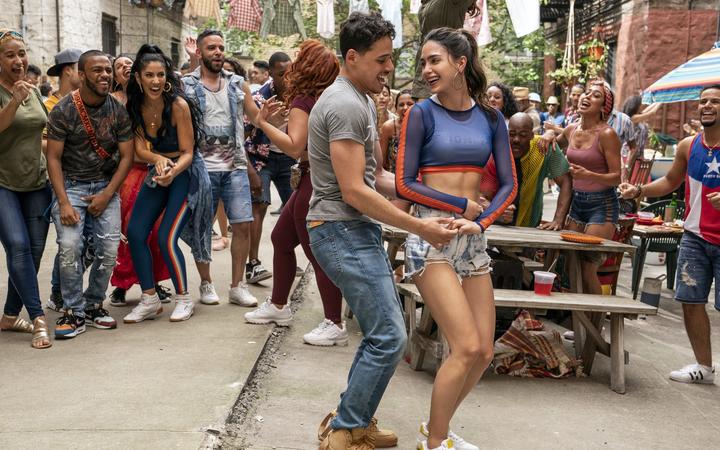 It reminded me of Spike Lee’s Do The Right Thing – sweltering in the summer heat – of Big Fat Greek Wedding, and any film with a dream at its heart.

In the case of In the Heights, the dream even has a name – the “suenito”. It’s the thing that drives everyone on the uptown Manhattan district of Washington Heights.

The film occupies that tricky grey area between film and stage. The characters can – and regularly do – break into song, dance and a lot of rap – at the drop of a hat.

And they can also command the camera, like our hero Usnavi, who’s nominally telling the story from his tropical bar on an island paradise.

But unlike the sort of story we’re used to in an immigrant community, particularly a Latino one – people from Cuba, Puerto Rica, the Dominican Republic – this story’s not driven by violence or crime.

What’s pushing Usnavi and Benny, Vanessa and Nina, Kevin the cab-owner and Abuela, the block’s grandmother – is finding their place in America.

And lest we forget, in the movies – ever since Al Jolson’s Jazz Singer – that’s always been the real American Dream, not simply the idea of making money.

The film is a good 60 percent music, and if you haven’t already had the chance to see and hear In the Heights anywhere, that’s a lot of music to take in for the first time.

But composer Lin-Manuel Miranda, who starred in the original and now plays the ice-salesman, knows what he’s doing.

He comes from the tradition of Irving Berlin, Cole Porter and Oscar Hammerstein, whose shows all had to win their audiences on opening night.

So, every song is delivered with a punch by director Jon M Chu. And even more impressively for a score that depends on a lot of rap, you can mostly hear every word straight off the bat.

The various storylines hang from one major plot – the neighbourhood has run down so much that everyone is moving out, selling up, going somewhere else.

The beauty salon’s heading downtown, Kevin’s taxi firm is being sold off bit by bit to pay for his high-achieving daughter Nina to continue her studies in California.

But Nina has her own issues. Stanford University is very white indeed, and she has no support system there.

Meanwhile Usnavi’s dream is to make enough money in his general store to buy a bar back home in the Dominican Republic.

What could possibly happen to all these people and their suenitos in just two sunny hours?

You think you know – I certainly did – and you’re going to be wrong at least fifty percent of the time.

The story is sneakily unpredictable, the songs get under your guard – maybe not as good as West Side Story, but maybe I just need to hear them another 50 years.

In the Heights has that magic feeling you can only get on Broadway, where everyone – particularly star Anthony Ramos – is giving 110 percent of everything all the time.

And it’s got something extra - a unique Latin fervour and optimism.  It’s true, they don’t make them like they used to. They make them better now.