Reality and charm are often the exact opposites so the film Minamata takes a gamble putting Johnny Depp in a true-life account of a horrific industrial crime, says Simon Morris.

Simon Morris: The story of Minamata was new to me, though it probably shouldn't have been. Japan's industrial waste became a well-publicised catastrophe when it came to light in the early '70s. It also led to one of the last great photojournalist features of Life Magazine, including one extremely famous photograph.

It's also the story of a famous photographer - one Gene Smith.

We meet Gene - played by a greying, bearded Johnny Depp - suffering traumas from his recent time in Vietnam as a news photographer. It's a bump seeing the once eternally young Depp showing his age for a change, and attempting the difficult transition from slightly exotic movie star to grizzled character actor.

One day Gene gets a knock on the door.

The unlikely-named Aileen, played by a French-Japanese actor called Minami, tips Gene off to the fact that Japanese industrial giant Chisso is pumping toxic waste into the waters - mostly mercury.

What's needed is the greatest photographer on earth to show the world.

It's a movie, so Gene has to be "the greatest photographer on earth", as well as, according to his boss, played by Bill Nighy, "the most impossible".

No journalist in the history of movies has ever been known as just a safe pair of hands or a pretty good photographer.

Director Andrew Levitas resorts to another Hollywood cliché when it comes to persuading the editor to give Gene the assignment. 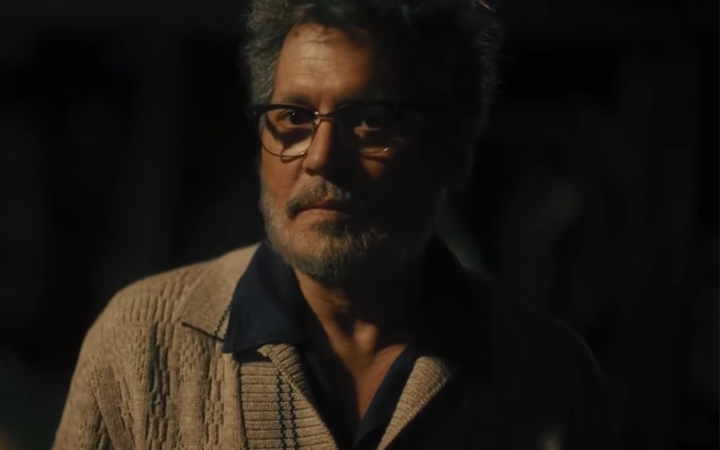 It's a small role, but English audiences will recognize Millie as popular mezzo-soprano Katherine Jenkins. Or as she's known to her postman, Mrs Andrew Levitas.

With Bill Nighy's character fired up by the persuasive performance of Katherine Jenkins, Gene takes off to Japan.

But he soon wonders if there's a stary here. The victims won't talk, nor will the Japanese industrialists who for some reason aren't keen on publicizing their connection with mercury poisoning.

But outside the factories, there are increasingly angry protests, from activists and also the families of the victims of toxic waste.

They demand that Chisso - and the Japanese government - start taking some responsibility.

Which is what Minamata is mostly about, of course. But it's framed with the old story of the burnt-out journalist getting back his mojo, and becoming determined to fight the good fight.

Along the way, he's tempted by bribes, bullied by company goons, and wouldn't know it, attracted by the lovely Aileen.

All of which I might have been less charitable about if the story of Minamata hadn't been so fresh to me.

Actually, just about all the most Hollywood elements of the film - as is so often the case in films like this - turned out to be true, even Gene and Aileen falling in love. And the gritty performance of Johnny Depp is rather better than I was expecting.

The Minamata story very nearly didn't get told at all, apparently, let alone featuring the famous photo of one of the victims "Tomoko in her bath" - one of Life Magazine's best-known images.

But the film reaches a satisfactory ending, even if it strikes a bittersweet note.

It marked the demise shortly afterwards of the once-popular Life Magazine, the home of so many brilliant stories and photographs before it closed in late 1972.

You could say it was progress - it was probably defeated by the twin forces of television and celebrity gossip magazines. But the Life pictures in Minamata are still the best things in the film.