A couple of years ago an effective little horror flick called A Quiet Place was put together by John Krasinski and Emily Blunt. They played a husband and wife in a world, as they used to say, where alien monsters are super-sensitive to sound.

“Make a noise and they’ll get you” is the thumbnail description.

Krasinski also directed and co-wrote the film, and his major achievement was to construct set-pieces that were so tense and effective that you didn’t notice that the story made the bare minimum of sense. 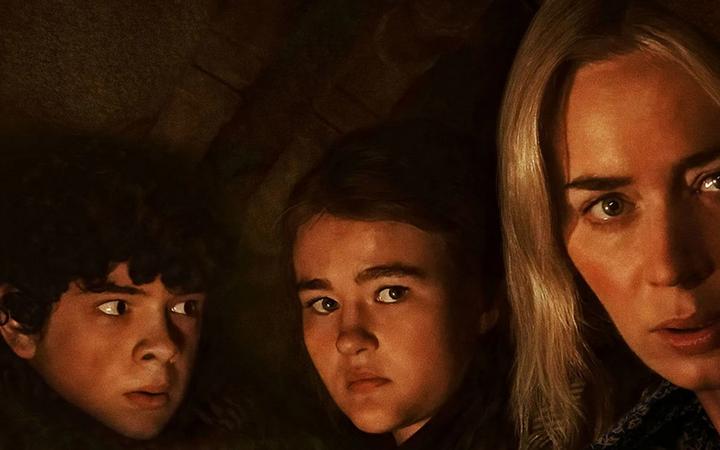 It was a big hit.  Hence – as is always the case with Hollywood – the sequel.

Well, make that a combined prequel and sequel.

We open on Day 1 of the Alien Invasion as the Abbott family go shopping in their little home-town at the very moment that things start happening on the news.

No sooner are they back in the car when various ET’s start attacking. And sensibly, A Quiet Place Part 2 doesn’t bog itself down with too much added detail or explanation.

Look out, here comes another one is all you need to know.

Flash forward 474 days, and now it’s just Emily Blunt – hubby got killed in the first film – with two kids and a baby.

Their secret weapon – as it is for the two films – is hearing-impaired actor Millicent Simmonds as the deaf daughter Regan.  You may or may not remember that her hearing implant could be weaponized against the monsters.

If you didn’t see the first one you may start asking inconvenient questions, like how many monsters are there out there, and how did so few manage to obliterate the world’s population?

The correct response to this sort of nit-picking is “Shut Up.”

Anyway, the family takes off towards some smoke on the horizon, which suggests there may be more people around.

Well, there are and there aren’t. Cillian Murphy is around but he tells Blunt that he can’t help.   And the few other escapees have apparently turned feral.

Blunt refuses to believe him. After all, she says, we’ve got each other. But no sooner have they formed a unit when events conspire to separate them.

Daughter Regan takes off to get help without telling anyone – it’s that sort of movie.  So, Murphy reluctantly goes after her, also on his own.

Meanwhile Blunt decides to go on her own solo mission to get medical supplies. She leaves the middle kid back at the shack to look after the baby.

Actually, the way things are going, I’m surprised the baby doesn’t sneak off too by this stage.

All of this sneaking off in different directions is to allow director John Krasinski to show his skill once again at long, tense, silent set pieces.

There’s almost literally nothing much else to A Quiet Place Part 2, any more than there was to its predecessor. And for what it is, it’s pretty effective.

The aliens are pretty scary, particularly when they sneak up behind. But frankly, who are you going to put your money on – monsters who have a nervous breakdown at the slightest noise or Blunt with a shotgun and unlimited bullets?  Me too.