When I went to Locked Down I knew hardly anything about it, except it was shot in fairly limiting conditions at the height of London’s own lockdown last year.

I also knew that it starred two actors I rather like – the affable Chiwetel Ejiafor, and that eternal good sport Anne Hathaway – and that it was directed by the usually reliable Doug Liman. 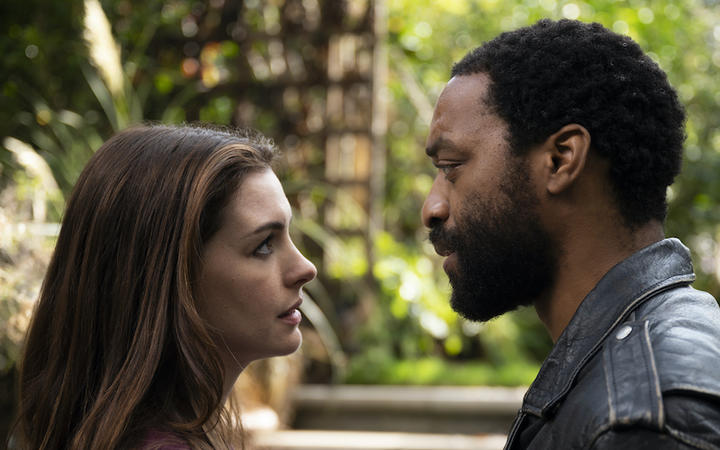 What I didn’t realise was that it was written in a couple of weeks by Steven Knight – who wrote the even more self-limited film Locke – and the whole thing was shot in 18 days.

It takes place, mostly, in a flat shared by Paxton and Linda.

Adding a certain frisson to their lockdown is the fact that they’ve just broken up. Broken up, but unable to actually separate.

Paxton, on the surface, seems your classic under-achiever, a casual van driver. Linda, on the other hand, is a high-flying executive.  She’s able to work through an endless series of Zoom meetings.

Trouble is, she’s starting to hate her job even more than she used to, particularly when it involves firing many of her work-mates. The fact that her bosses are impressed isn’t much consolation.

Like many people in lockdown, Linda and Paxton start resuming bad habits – smoking, say, and some pretty enthusiastic drinking.

Now I said I didn’t know much about Locked Down going into it. That’s not quite true.  I knew that it hadn’t been greeted with universal enthusiasm.

Had the trad romantic comedy fallen out of favour? Did some critics feel it was too soon to have fun with a lockdown?

Or didn’t they like the fact that it suddenly turned into a heist movie?

Well my response to that is – they’re crazy!  I loved all of that, and I particularly loved the fact that you never knew who was going to suddenly pop up on a Zoom meeting.

There’s Stephen Merchant and Mindy Kaling.  There’s Ben Stiller and Lucy Boynton, one of the few good things in Bohemian Rhapsody.  Oh my God – is that Ben Kingsley?

The cinema at which I saw Locked Down was regularly rocked by a sound I hadn’t heard for ages - enthusiastic, middle-aged laughter.

Locked Down rests on a formula as old as time – or at least as old as Fred Astaire and Ginger Rogers movies.  We love Paxton and Linda, they can’t stand each other.  And we wait for them to finally catch up with the fact that they were wrong.

The sticking point occurs when Paxton - currently not allowed to work - has to be employed under the table, as it were, because super store Harrods needs to clear all their outstanding orders.

One of those orders turns out to be a famous diamond, to be delivered by Linda’s firm to an extremely unsavoury despot.

Tempting. Adding an extra degree of difficulty is the fact that the fictitious name selected for Paxton to work illegally under is the hard-to-ignore “Edgar Allen Poe”.

And all the time we’re seeing the surreal sight of the whole of London – including Harrods - totally closed down.

We’re also reminded of once familiar sights – like queuing up outside a convenience store, waiting for some idiot to buy more toilet rolls than anyone could possibly need.

Locked Down makes no important points – other than that a lot of wealthy people got, and are getting, even wealthier during the pandemic.

But it was enough that it was funny, it was well-enough written, it was shot at pace and it rested on two extremely likable performers doing what they do.