Eccentric New Zealand film-maker Florian Habicht has pretty much invented his own genre.

Part documentary, part home movie, part Middle European fairy story, part weird art-film, a Habicht film rarely has an actual script. Habicht seems to make it up as he shoots, and often writes himself into his films. 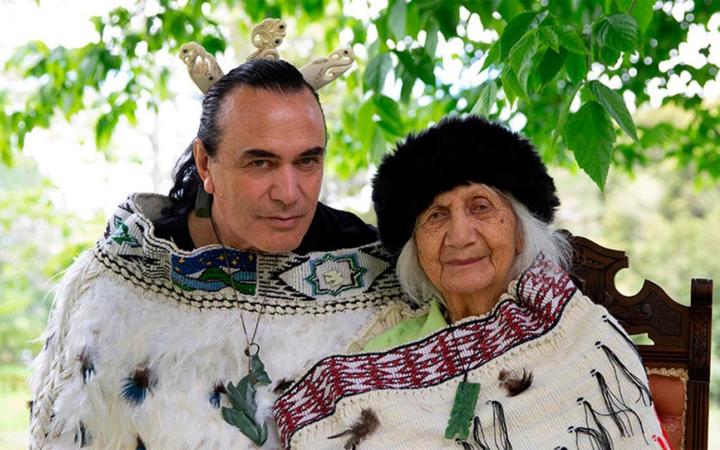 That’s certainly the case with his latest, James and Isey, which is getting very good notices from critics and the likes of Taika Waititi and English maverick pop star Jarvis Cocker.

What it is is the countdown to Isey Cross’s one hundredth birthday.  And doing a lot of the counting down is her youngest son and caregiver James.

I say “care-giver”.  Even at 99, Isey doesn’t seem to need much looking after. She’s a tough cookie, certainly, but she belies that with a permanently positive attitude – on camera at any rate – and a face illuminated by laugh-lines.

But James has decided to devote himself to caring full-time for Mum, even if sometimes you wonder which one’s doing the bulk of the caring.

Back in the day, James was a would-be singer, a would-be actor, a would-be celebrity of some sort.  He occasionally stops the action to show old clips of his younger self.  Since then, James has taken a turn for the spiritual.

James sees himself as a tohunga, a high priest, complete with his own unique chants, borrowing from Maori, Native American and something of his own devising.

His high-minded outlook is occasionally at odds with Isey’s more down to earth practices.

Habicht clearly fell under the spell of the pair, particularly the bourbon-drinking warrior queen.

Isey seems to take life as it comes, while still enjoying James’s flights of fancy, as he counts down the days to the actual birthday.

In many ways James and Isey is a relic from – not so much another era, but a timeless one.

There are songs from the early days of Kiwi entertainment – “Haere Mai”, a glorious version of “Home Sweet Home”, sung by the Howard Morrison Quartet, and a surprise appearance by Six60’s Matiu Walters, who turns out to be another of Isey’s relations.

But everyone around Kawakawa, Northland seems to be related to Isey, one way or another.

Along the way there are guest appearances by politicians Jacinda Ardern and Kelvin Davis (Kelvin’s Isey’s nephew, we discover).  We join James and Isey on a fishing expedition, and then later a trip to a local fast-food outlet.

It’s all very endearing, and I notice that many people are discovering hidden depths in the relationship between mother and son.   Is this a reminder of old pop truths – Don’t worry be happy, and Che sera sera?

Habicht’s major strength is his ability to engage with the people he talks to, without  judgement.  James and Isey clearly like him as much as he likes them – they make a point of including Florian every step of the way to Isey’s Day of Days.

Your reaction to the film James and Isey may be an indicator of how nice you are.  It’s definitely a film for family audiences - Isey is reassuring on that!