Jason Statham takes his foot off the brake in Guy Ritchie's violent thriller about revenge, greed and grudges.

Simon Morris: The allure of action man Jason Statham is something of a mystery to me. It's not as if he's got any range to speak of, or shows an interest in getting any.

I always assumed the Stath aimed mostly at small boys of all ages, but to my surprise there seem to be quite a few women in his fan club, all keen to see him do what he does.

What he does, mostly, involves taking out people - and in one instance large sharks - with extreme prejudice.

In the past, he made some effort to show that beneath the rough-diamond exterior beat a heart of gold. Not this time. Today, the Stath is exhibiting Wrath of Man.

Statham plays H, a man of mystery who we meet applying for a job driving armoured vans. He's greeted by the boss - Eddie Marsan, of all people. It's clearly "hire a short Limey week" in Hollywood.

H shows his skills at the gym and the firing range and squeaks in with a just-above average score.

We don't need to see the Stath's secret smirk to realise he's hiding his light under a bushel. H is here for his own secret purposes, and it's just a matter of time before we find out what they are. I'm guessing they'll involve taking hoodlums out with extreme prejudice. In fact, here come some now.

Still, don't get too used to him. Because H's idea of protecting the company's property is - you've guessed it - shooting first and not bothering to ask any questions afterwards.

His colleagues are puzzled. Who knew H was suddenly such a deadly shot? Clearly there's more to him than meets the eye. Actually, we could have told them that.

Then director Guy Ritchie steps up to show what he can do. Flashback anyone?

In fact Wrath of Man - my pick for the silliest film title so far this year…. Anyway, it had already opened with what we screenwriting buffs call "the inciting incident" - in this case, a big violent heist in which the two drivers were shot, and so was an innocent bystander. 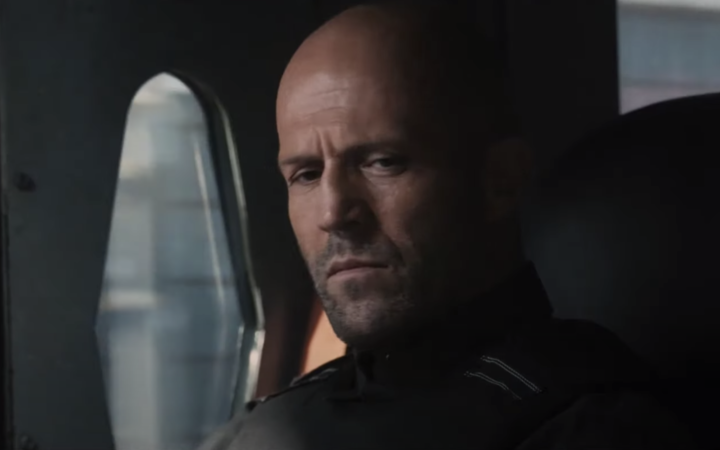 The innocent bystander's name was Duggie, and he was the son of H.

At this stage we start to suspect that H may be, I don't know, a retired CIA guy with a special set of skills, blah blah blah.

But professional violence purveyor Guy Ritchie has no interest in a nuanced character like that. He simply makes H a homicidal gangster, and someone's just lit his fuse.

Flash forward - the action of Wrath of Man whizzes backwards and forwards from now on like a ping-pong ball - to H rounding up the usual suspects with his loyal gang.

After running through, and running out of, professional bad guys, H decides it was an inside job all along. Which is why he's gone undercover as a humble armoured van driver.

Now all H has to do is attract the original heisters, the ones who killed Duggie. Got it?

It's not particularly complicated, but we do need to find the gang of robbers in question. And Guy Ritchie seems incapable of weaving this bit into the story. So he simply flashes back, finds them and follows them around for quite a while.

It's usually considered a little unprofessional in a thriller to abandon the main character for 20 minutes or so, but Ritchie doesn't appear bothered.

He simply covers this deficiency with lots of shooting, blood and car-based mayhem.

At the end, there's a "last man standing". No prizes for guessing who that is in Wrath of Man.

It pretty much delivers what's expected by anyone who went to the box office and said "Two tickets to the Stath please, and a giant bucket of popcorn".

Empty calories, in other words.