Comedian Eddie Izzard, for a while, was the greatest thing on stage – loose, intelligent, smart as a whip and the funniest comic in the world.

But for some people that’s not enough.  Izzard translated the stage-acts into various languages, including French and German, then ran an astonishing number of marathons, just to show you. 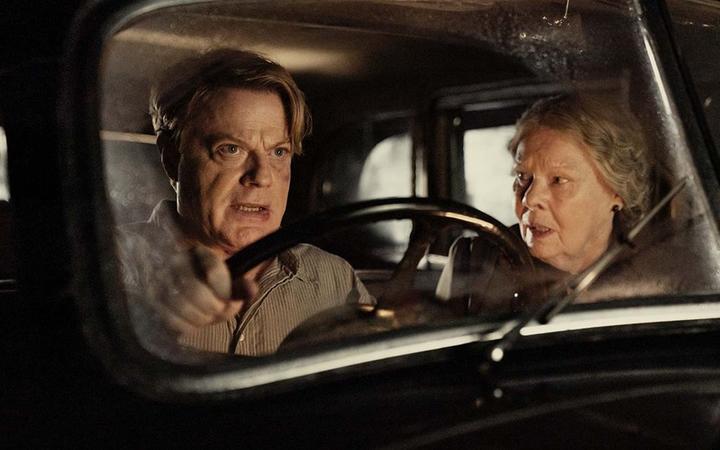 And as a final challenge to reporters around the world, Eddie reassigned genders – or at least pronouns. No longer in boy-mode, Eddie is now proudly a she, although still playing male roles in films like Six Minutes To Midnight.

There’s another challenge Izzard has faced for years – to become a serious movie star, not a comedian who dabbles.

And to further that transition, she’s written a script based on a real-life event – or at least a real-life establishment.  Six Minutes to Midnight is set in Izzard’s old home-town, Bexhill-on-Sea, in Sussex just before the Second World War.

Sussex is the site of an unusual school, presided over by headmistress Miss Rocholl, played by Dame Judi Dench.

At the time there’s an informal alliance between certain circles of Britain’s ruling class and Hitler’s Germany. The Augusta Victoria College was set up as a sort of finishing school for the daughters of Germany’s leaders.

The British Secret Service has an interest in this school, and send in a crack agent, Thomas Miller - Izzard - with a license to teach English.

I imagine one or two sceptics at this stage are wondering how much of this last stuff is actually true?  Well no, not all of it.

In fact, I suspect once we get past the school’s existence, and the fact that there were a significant number of Nazi sympathizers in high places in 1939 England, much of the story of Six Minutes to Midnight has been cobbled together out of contemporary Boys’ Own Papers.

It smacks too much of the morale-building B-movies of the time, right down to the none-more-1940s title Six Minutes to Midnight.

And while I’m always very fond of Izzard, I have to say she just doesn’t have it in her to be an irony-free star of a spy story.

Despite the film playing to some of  Izzard’s minor strengths – the character runs long distances, for instance, and occasionally slips into German – Izzard is still no real threat to Benedict Cumberbatch, or Judi Dench for that matter.

Would it have helped if she’d favoured her major strength, and turned this vintage slice of cheese into a comedy?  Only with a more experienced writer, I suspect.

Izzard’s friends have loyally backed her up.  Aside from the hard-working Dame Judi, there are cameo roles for James D’Arcy as a sinister policeman and Jim Broadbent, no less, as a jovial bus-driver.

But the test of a film based on real life is this. Are the most unbelievable elements in fact actually true?  Or are they in the main mostly made up?