Voyagers is one of those films that put most of its limited budget up on the screen, leaving very little left over for publicity.

I dropped into my local cinema knowing nothing about Voyagers apart from what I saw on the poster.  For instance, I had no idea Colin Farrell was in it. 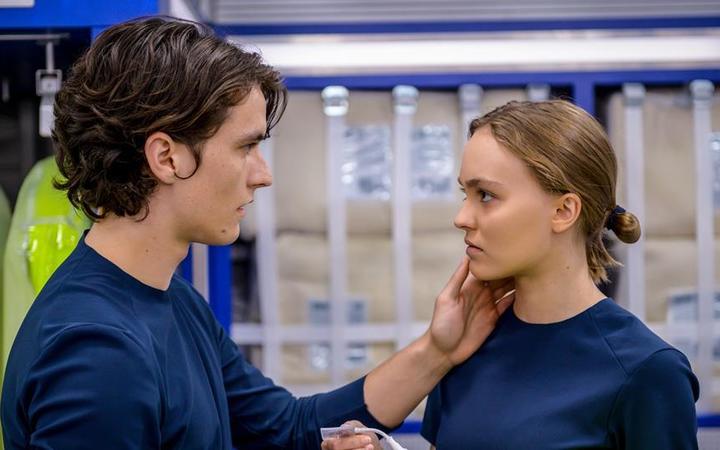 The setup is that Earth is doomed – again – but there’s good news. They’ve found another planet.

The bad news, of course, is that it’s a long way away, and the only way to get there is to breed your crew on the way.  Two more generations of crew in fact.  Richard - Farrell - volunteers to be the infant crew’s teacher and guardian.

It’s Harry Potter in space, you could say, with all these brilliant young minds, from all over the world, being taught by machines, with Richard providing some human guidance when needed.

But the looming problem, as anyone who’s had any dealings with teenagers could tell you, is going to be puberty.

The way Mission Control planned to keep those hormones this side of raging was medication. Here kids, sip this blue liquid…

The two leaders of the group are earnest Christopher and rebellious Zac. And once they twig to the fact that their personalities are being suppressed by the Man, they decide to take action.

Once off the leash, Zac and Christopher start exploring the wild frontier of feelings and urges – like the fact that half of the crew are young women. Very attractive young women, like Sela, played by Lily-Rose Depp.

Sela is on her own journey of discovery – long chats with Richard about the mission – and the fact that no-one on the spaceship will reach journey’s end.

How can people be expected to be so saintly and selfless on behalf of people who aren’t even born yet?

Meanwhile a similar message is being played out rather more viscerally below decks. Zac has encouraged everyone to join him in abandoning the meds.

And things get worse when Richard – the responsible adult – is taken out of the picture. Who’s in charge now?

On the one side, responsible Christopher, backed up by dull, respectable Sela. On the other, rock and roll rebel Zac.

Who do you think a teenage crew is most likely to pick?

In other words, as I’m sure you’ve spotted by now, it’s that alarming school favourite, Lord of the Flies in space.

The message of William Golding’s book remains – ordinary people will follow the path of least resistance and are easy prey to narcissistic bullies like Zac.

In fact, the message seems even more timely now as we watch similar illustrations play out around the world.

The fear of the other, the appeal of freedom to do what you like, regardless of who it hurts, an apparently strong leader making all your decisions for you…. Suddenly common decency seems rather old hat.

Voyagers, written, directed and produced by American Neil Burger, aims higher than it needs to – there are quotes from Kubrick, and a punchline unwisely borrowed from Ridley Scott.

But if you’re going to make a mid-range sci fi thriller, aiming high is not a bad way to start. I was pleasantly surprised.