You can always tell a newbie to the worlds of Godzilla or King Kong. They always presume that, just because a monster is 300 feet tall, breathing fire and brimstone and tromping all over highly populated cities, he has to be the baddie.

Far from it. Right from the start Godzilla in particular was always seen as more sinned against than sinning. 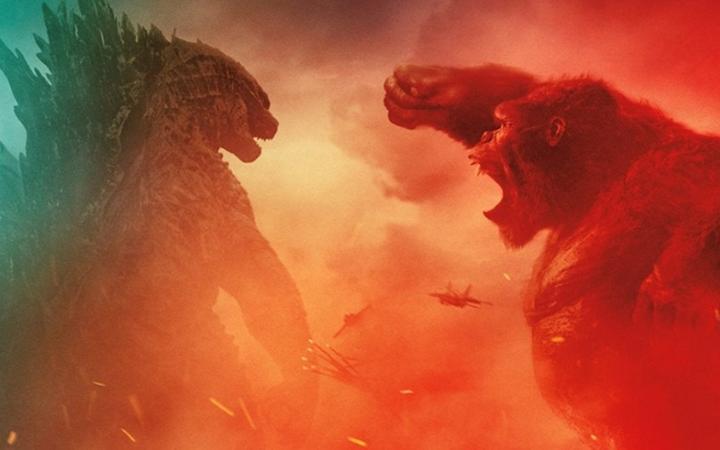 When the latest series of Godzilla movies took hold in 2014, the former rubber monster was refined as a mighty Titan, mostly on our side, and often summoned to counter other gigantic beasts who weren’t so favourably disposed towards us.

At the same time, the Legendary Studios shaped up a King Kong franchise, with a view to repeating the success of the 1970s Japanese matchups between the two monsters.

The “classy actor” role in these films has previously been filled by everyone from Sally Hawkins and Charles Dance, to Bryan Cranston and Juliette Binoche, of all people.

Hall is mostly on her own here when it comes to exposition, for anyone who goes to a Godzilla/King Kong movie actually wanting to know what’s going on.

She gets some support from the strapping Alexander Skarsgard, who tells Hall, as Kong’s minder – that there’s trouble afoot and only the big ape can help them.

Hall has help from a pint-sized moppet called Jia, who turns out to be Kong’s greatest friend in the world.

Jia is played by Kaylee Hottle, who ticks so many boxes they may need some more boxes.  She’s not only deaf, but comes from four generations of deaf people.  She’s, I think, of Native American stock, she signs brilliantly – naturally – and she’s the best character in the film.

The gimmick being that Jia has taught her big buddy to sign too. That’s right, Kong can talk.   But I know what you’re thinking. You’re thinking “We don’t need him to talk, we want him to roar.”  Or possibly “Where’s the other guy?  Where’s Godzilla?”  Well, your patience has been rewarded.

Godzilla is back with fire in his eye, and he’s angry.  He’s angry at us!

Some people are wondering “But Godzilla is a friend to humanity”.  Not me, of course.  I could never see how anything that size trampling entire suburbs into the dust could be a friend to anyone.  But I never quite followed all that Titan lore.

Fortunately, Hall has stuck around to keep us up with the play.

It seems for the past three years, the two heavyweight champs – Godzilla and the gorilla - have been taking down all the minor contestants until there are just two left.  And, of course, “there can be just one”…

Meanwhile, over to one side there’s some much-needed - and I have to say, rather entertaining – sub-plotting to all this Alpha Male huffing and puffing.

Their mission is to find out the real villain, the one who got Godzilla all riled up.

There’s no question that Godzilla versus Kong is ever going to challenge War and Peace in the literary stakes.  It’s a big, noisy headbanger of a movie for people who for some reason have been missing these things over the past year or so.

As Ken Watanabe said in the first Godzilla movie: “Let them fight.”  The audience I was with was of the same opinion.