The Father has been nominated for multiple awards around the world – unsurprisingly perhaps because of its stellar cast, led by Oscar-winners Sir Anthony Hopkins and Olivia Colman, and also because of its subject matter.

The tragedy of Alzheimer’s is certainly the disease du jour at the moment, it seems. 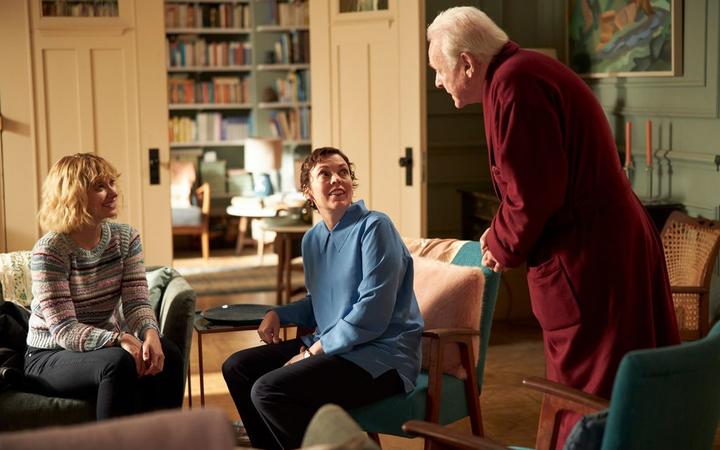 But don’t be fooled. This is no safe, “disease of the week” drama, nor is it a carefully tailored swan song part for a distinguished older actor.

The Father is a brilliant screenplay, based on an equally brilliant theatrical play by Frenchman Florian Zeller, and Hopkins is alarmingly good in it.

The trailer for The Father has been around for months now, so potential audiences for the film are presumably aware of the general idea of it. But they don’t know the half of it!

I should have been warned by the presence of writer-director Zeller’s English collaborator, the distinguished playwright and screenwriter Christopher Hampton, famous for Dangerous Liaisons and Atonement.

The Father opens on aging Antony – Anthony Hopkins – getting up and pottering around his enormous flat. His daughter Anne – Olivia Colman – pops in to visit. Except it’s not really a social call. She’s here because Dad has terrorized yet another carer, and she’s going to have to find a replacement.

Or is this the case? Her story keeps changing. Is Anne staying or taking off to Paris?

Does Anne have sinister plans to take Dad’s flat from him? He wouldn’t put it past her.

There’ve been strange goings-on around the flat – around his flat – recently.  Like the unexplained appearances of a total stranger – played by Mark Gatiss – making himself very much at home here.

Clearly Dad’s feeling a little absent-minded here, it could happen to anyone. For instance, he thought the character played by Mark Gatiss was actually played by Rufus Sewell.

A momentary lapse, obviously. Thanks goodness Anne’s back with the chicken for dinner.

And suddenly we’re on the back foot too. That’s not Olivia Colman. That’s Olivia Williams, not at all the same thing.

Around now we start to lose our own bearings.  When Dad wakes up the next day, it seems to be the same day he had yesterday – that chicken dinner is certainly rather familiar.  And is he about to meet his new carer Laura, or has he already met her?

All the time Anne - who really is played beautifully by Olivia Colman - is struggling, beaten down by the relentless bullying by her father, and also by the fact that he’s not coping and doesn’t know it.

The Father is a part that could depend heavily on the support of the other characters – the so-called “real people” in the real world.

But Hopkins has never passed any of his workload to anyone before, and he’s not going to start now.

Hopkins is absolutely astonishing here, particularly the range of power he can summon up.  One minute he’s a lovably dotty old charmer, then he’s a thoroughly nasty piece of work, and suddenly he’s a towering force of nature.

The movie The Father continues to second-guess us too. In fact we’re never quite sure what day it is, or even where we are at times. The set shifts brilliantly in size, in colour, even in shape.

The Best Actor Oscar competition will be fascinating this year – Sir Anthony Hopkins against popular favourite, the late Chadwick Boseman.  But this time, whoever loses, we all win.