When the brutal English Civil War finally came to an end in the mid-Seventeenth Century, the weary Cavaliers and Roundheads put away their weapons and tried to get back to normal life.

In the case of Captain John Lye – played by Charles Dance - that meant working on his farm with his younger wife Fanny, and their 10-year-old son Arthur. 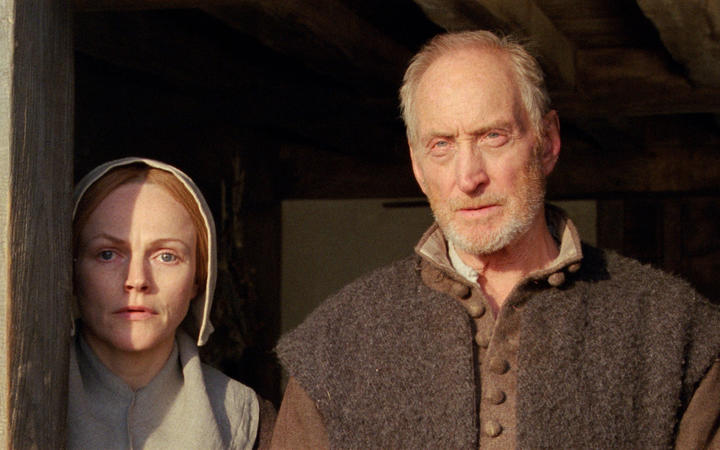 In Oliver Cromwell’s Puritan Protectorate, entertainment was cut to virtually nothing. The only book on Blackhill Farm is the Bible, the one time the family goes out is to church on Sunday. And levity of any sort is punished – John Lye isn’t one to spare the rod.

But as the title of the film Fanny Lye Deliver’d suggests, this is not John’s story. It’s the story of his wife Fanny, played by Maxine Peake.

What changes things is the unexpected arrival of a young couple, who break into the farm while the family is at church.

In fact, they arrive stark naked, though they steal some of the Lyes’ clothes before the family returns home.

Thomas Ashbury and his wife Rebecca throw themselves on Captain John’s mercy. They were robbed, Rebecca is ill. Lye is suspicious, but reluctantly agrees to let them stay overnight before reporting to the constable in town.

Tom’s easy charm contrasts with Lye’s unbending rectitude, so Fanny’s inclined to give the young interlopers the benefit of the doubt. Laughter has been a rare occurrence on the farm.

But the young couple are not entirely what they seem.  Rebecca – and particularly Tom – are free-thinkers in more ways than one. And far from being victims of crime, it turns out they’re wanted themselves by the authorities.

John Lye’s suspicion of his young guests is equalled only by a dislike – and mistrust – of the sinister High Sheriff.

Against his better judgement, he protects the Ashburies. But he lives to regret it when they go behind his back, suggesting that Fanny Lye might like to be delivered from this dreary life.

Fanny Lye Deliver’d promises – and delivers – a fascinating folk-tale. Much of its power lies in the fact that we barely know the rules of 1657.

Fifty years after the free and easy age of Queen Elizabeth and Shakespeare, England has taken godliness to extremes. The war against the tyranny of kings seems to have resulted in something just as bad.

But behind closed doors, freedom of thought and behaviour refuses to be suppressed, it seems. Certainly, the Ashburies show no intention of being taken anywhere, no matter what the cost to the Lye family.

There’s violence to come – we’ve yet to see how far the Lord High Sheriff will go to get what he wants, while the increasingly desperate Tom warns the family he’s also prepared to do whatever it takes.

As he tells Captain John, the recent war made worse men out of both of them.

But while the men fight, the real battle is for the soul of Fanny Lye.  Fanny Lye Deliver’d is written and directed by Thomas Clay, who, unusually, comes from a sound and music background.

Clay composed the music as well, just about all played on authentic 17th century instruments.

So, it sounds exotic, it’s set in an unfamiliar time and place, and good performances ensure our sympathies shift throughout the film.

It’s as much fable as it is story perhaps, but it’s all the more intriguing because you suspect much of it may be true.