There’s more to the English movie Ammonite than meets the eye – like ammonites themselves, I suppose, which are the fossils of ancient marine creatures hidden in stones on seashores.

Ammonite tells a story of one of the most distinguished early scientists in the field, self-taught palaeontologist Mary Anning. 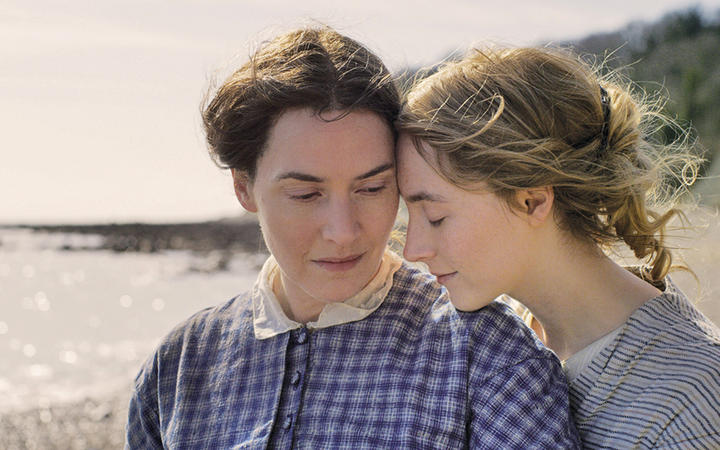 The fact that I – and probably you – had never heard of Mary is mostly because of the politics of 19th century scientists at the British Museum. Not only would they refuse to give her credit, often they’d buy Mary’s discoveries, then pass them off as their own.

But, within the scientific community, Mary was well known. It was she who’d discovered the first entire plesiosaur in Britain when she was just a child.

Mary’s lack of official standing wasn’t to do with her being a woman, or even being a lesbian.

No, like so many bad things in English society, it was mostly to do with class. She didn’t belong – the same rampant snobbery at the British Museum that cropped up in the recent film The Dig, set a hundred years later.

But I digress. Mary, a wonderfully buttoned-up performance by Kate Winslet, makes a precarious living selling fossils in Dorset.

One day she gets a visit from a fan, a wealthy would-be scientist Roderick Murchison.

Science was mostly the preserve of the rich – only a gentleman could afford to do it.

Murchison is certainly keen to learn from Mary Anning, but he also wants to help his ailing wife. Could Charlotte be induced to share his enthusiasm?

The last thing Mary wants – or can afford – is an assistant, particularly one with no experience.  But Murchison makes her an offer she can hardly refuse – regular income for two months.  Even if Charlotte seems an unwilling apprentice.

Charlotte Murchison is played by Saoirse Ronan, and it’s a real treat watching the performances of two of the best in the business – between them they share a staggering 11 Oscar nominations.

Their growing friendship, culminating in romance, is almost inevitable. Who wouldn’t fall in love with Kate and Saoirse?

But as I say, there’s more to Ammonite than simply forbidden love.

In fact, in this story, attitudes to women’s friendships – and more than friendships - don’t seem particularly judgmental or disapproving.

Whether this is because, like Queen Victoria herself apparently, most people at the time were unaware of lesbians, or whether they simply had enough on their mind simply getting by in the 1840s, director Francis Lee doesn’t explore.

Despite the real-life characters – both Charlotte Murchison and her husband Roderick were also genuine scientists – Ammonite is a work of fiction.

But it’s grounded in the reality of women pushed into the background by the powers that be.

There’s one scene that encapsulated Ammonite for me, when Mary visits Charlotte at her town-house in London. Mary is embarrassed when Charlotte kisses her in full sight of the family maid. But for upper-class Charlotte the maid didn’t really exist.

It’s moments like this that lift Ammonite above the competition, and will warrant, I’m sure, both Winslet and Ronan more Oscar nominations. Even if, as usual, they’ll probably be beaten out by something more obvious and less deserving.