Review - News of the World

News of the World is a pretty fair attempt by British director Paul Greengrass to tell a version of, for many people, the greatest western of them all, John Ford’s The Searchers, writes Simon Morris.

It’s no surprise that a western like News of the World should wind up on Netflix, rather than in cinemas. Despite the presence of star Tom Hanks and reputable director Paul Greengrass, westerns remain terminally unfashionable. 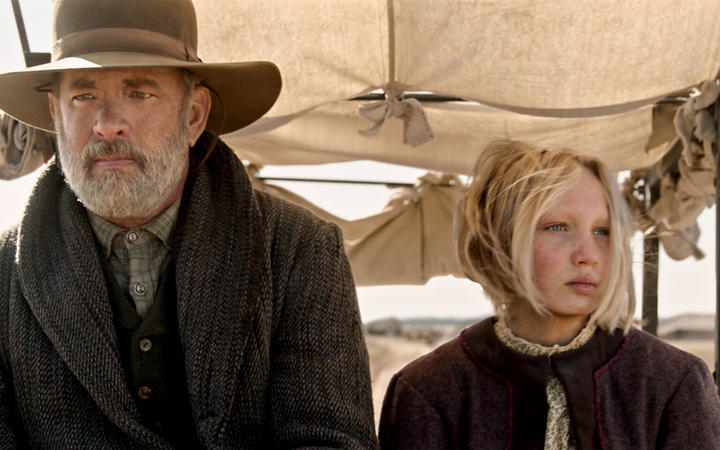 They’re not fantasy or sci-fi. They’re hardly known for their diversity, mostly appealing to straight, white males. And how is a film set in the 1860s remotely relevant today?

You could say character, morality and history are usually pretty relevant, but News of the World adds another wrinkle.

Captain Jefferson Kidd is retired from the army after the American Civil War, and now travels Texas, reading to small towns hungry for news from the world outside.

While riding to the next town, he discovers an upended carriage by the road, and next to it the murdered figure of an Indian agent.

He was transporting a young girl.  She’d been kidnapped by a Kiowa raiding party years before, and the Captain finds her hiding nearby.

She may be blonde and German-looking, but these days Johanna identifies as Kiowa. She can barely remember her original family from all those years before.

The Captain finds out more about the little girl’s tragic story.

In fact, Johanna was orphaned twice – first when she was kidnapped by the Kiowa, and more recently when her Kiowa family was taken from her.

The Captain decides he has no choice but to take her back to her German family’s relations further South.

While News of the World is reminiscent of John Ford’s famous classic The Searchers, there are two major differences.

First, it begins where that film left off – so what happens to the white girl brought up Native American?  And what if Johanna is found, not by the hostile racist played by John Wayne, but by a far more honourable character?

Hanks has always had the innate decency of that other great western actor, James Stewart.

So that’s the set-up of News of the World, but like all good westerns, the basic plot is only part of what the film is about.

The Captain and Johanna’s relationship starts with puzzled incomprehension on one side, and outright hostility at times on the other, before improving and deepening.

And as they ride through the formerly Confederate Texas, they’re confronted by a nation trying, often painfully, to rebuild after a terrible war.

Texas in particular is struggling to come to grips with, to coin a phrase, a new normal.

There are farming communities with an eye on the future, and shady characters simply out to make a killing.  And the ageing Captain and his young companion look like easy pickings.

And further ahead, rival communities have their own dream, so to speak, to make post-war America Great Again.

If anyone thinks the current problems in the States are new, says this film, well, think again.

But the hook of the film is in the title – News of the World – the idea that stories, true stories, from outside can broaden our minds, entertain us, teach us and take us somewhere else, if only briefly.

Newsreaders like Captain Kidd were the closest thing a pioneer town had to today’s media and this film reminds us that the Fourth Estate – despite recent evidence to the contrary – can and should be a power for good.

Like a literate, decent western starring Tom Hanks, in other words.