Remember those yuppie risk-takers of the 1980s? The Nest features Jude Law as the ultimate example of ‘fake it till you make it’.

The film is mostly produced in Canada, not that you’d know it, and despite the Canadian money, and expat Canadian writer/director Sean Durkin, The Nest opens in the US, where expat Brit businessman Rory – played by Jude Law – is getting itchy feet again. 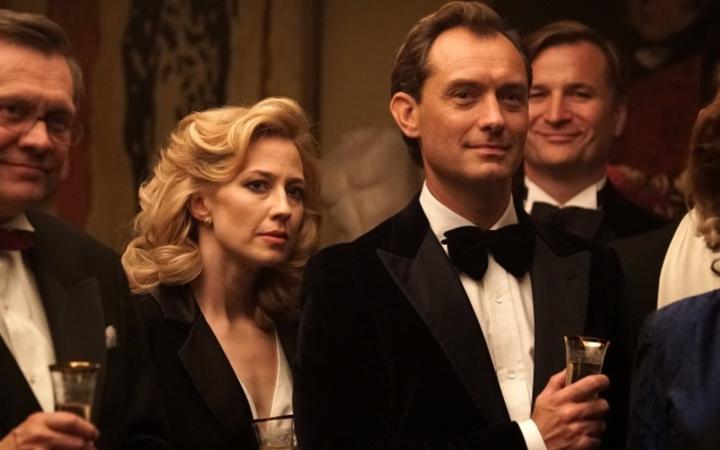 Rory’s wife Allison has heard this before. He’s constantly dissatisfied, and the next move is always going to be the Big One.

The Nest is set in the early Eighties when gambling on the future – ‘risk-taking’ they called it – was being encouraged by Margaret Thatcher’s New Right.

This is that story from the point of view of the people put most at risk by these risk-takers.  Rory’s family have very little say in the matter.

They’re whisked over to the UK, where they know nobody. Rory rents a run-down stately home, no less, puts the kids into private schools and sets up a stable for his wife.

Anyone who lived through the Eighties will know the type – the high-flyer who keeps moving ahead because to stop is to fail, to fall behind, and occasionally to go to jail.

The Nest is a film that depends almost entirely on one performance.  Carrie Coon does a great job as Allison, so do the two younger actors playing the kids.  But they know this is a one-man show, and that man is Jude Law.

Playing a man who spends the entire film lying - to his clients, to his family, to himself -  Law has his work cut out inviting us to go with him.

But he’s undeniably riveting, as much as anything because he reminds us of how many business-people think – particularly in the States.

To them – and to the people who admire them – this isn’t even lying as such.  It’s just business, “small talk” as Rory calls it.

And when those ethics spill out into all the other aspects of life, when the perpetrators can’t tell the difference between lies and truth, it’s clearly time for an intervention.

The Nest isn’t exactly a pleasant journey, and it doesn’t quite reach a satisfying destination.   But it’s a useful reminder that while most of us won’t make billions of dollars through holding our nerve in a crisis, nor will we end up in jail when it all goes Pete Tong!

“Learnings”, as we’ve been told to call them.