No matter how cheesy it looks to today’s audience, the English-based beauty contest was just about the biggest thing on TV – it even out-rated the Moon landing.

Just as the burgeoning Women’s Liberation movement was taking aim at – let’s face it – a pretty easy target, so an anti-apartheid group was using Miss World as a stick to beat the South African government, and by implication, racism itself. 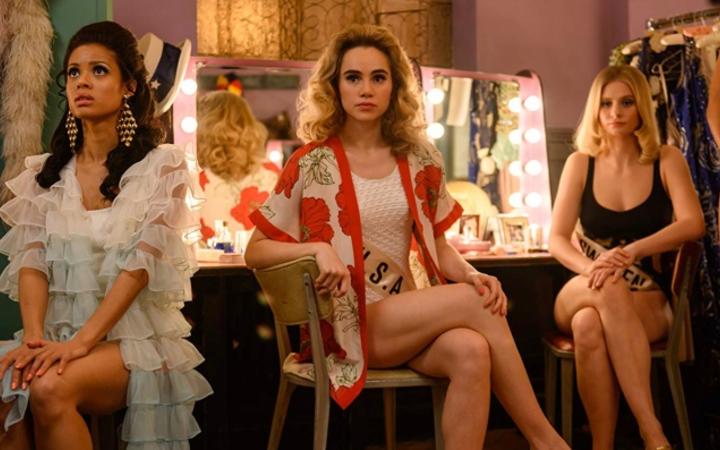 Political activists tend not to take on faceless, multi-national corporations, or governments and their armies. They prefer to target things like Miss World, or sports events, or rock tours because they’re popular. People like them, and therefore they’ll be upset when they’re disrupted.

The down-side is that by trashing the public’s amusements you can come across as pompous, middle-class killjoys.  Until history catches up with you, of course.

Today, beauty pageants in Britain, and New Zealand for that matter, are pretty much a non-event. It’s been years since they were on prime-time TV. But astonishingly, they’re still going strong elsewhere – particularly in the so-called Third World.

Which ended up becoming a major part of the plot of Misbehaviour to the surprise, I suspect, of most of the people making it.

Miss World was one of those phenomena that were unaccountably popular in the 60s and 70s – like The Black and White Minstrel Show and It’s a Knockout.

The myth was that mostly men watched Miss World, but that’s simply not true. Everyone watched it, none more than young girls and their grandmothers.

For all the fact that it, almost literally, objectified women – stand where you’re put, now go over there – it also offered an opportunity for people with few other advantages in life to go somewhere and be someone.

That was the fantasy being sold by Miss World showrunners, Eric and Julia Morley.

But by 1970, winds of change were starting to blow over the catwalks of beauty pageants. Groups of furious women were plotting to take down the patriarchy.

Well, I say furious. But people like middle-class Sally – Keira Knightley – and rough diamond Jo – Jessie Buckley - were having rather a good time, sticking it to the man.

1970 was the year it was decided that Miss World had had rather an easy time of it, and had some serious comeuppance coming up.

The plan was to invade the grand finale, and take on the Morleys and host, comedian Bob Hope, where it hurt – on live TV.

But in fact, Miss World was already having problems - racial this time.  It was never a good look for the only contestant from the entire continent of Africa to be the white representative of apartheid South Africa.

So, the Morleys came up with a solution – two finalists from that country.  The white Miss South Africa – played by Emma Corrrin, just before conquering the world as Princess Diana in The Crown – and the black Miss Africa South.

In fact, there were several women of colour in the lineup that year, including the exotic Miss Grenada.

Gugu Mbatha-Raw is perfect as the Caribbean contestant.  Beautiful, but tough, decent and ambitious – in a just world, she’d be going somewhere.

The point Misbehaviour wants to make is that it’s not a just world. Except events keep tripping up easy point-scoring.

We see Sally, the would-be mature student applying to a panel of sexist pigs – we can tell because they’re secretly giving her points out of ten. Sally storms off, only to be told in the next scene that she’s been accepted.

I mean, they’re either sexist pigs or they’re not, surely. And you could say the same thing about the film’s punchline, which we’re constantly told can’t happen because of the patriarchy.

In fact, too many targets – including the public’s dubious taste – are under attack in Misbehaviour.  And, like real life, they get tangled and contradictory in a way that needs rather a better film than this to make a decent drama out of them.

The events covered here had several ripple-down effects on the future, but not quite the ones expected. Certainly, televised beauty pageants in Britain were demoted over the years, but rather more years than you’d expect.

It also took 25 years before the demise of apartheid in South Africa.

Meanwhile Miss World itself continues to be hugely successful around the rest of the world, despite everything.

Sexism, racism, entrenched power, the rights to watch what you like versus the wrongs of being out of step with history…  It’s a lot to try and cram into one little feelgood comedy.

The best moments in Misbehaviour are what seem like happy accidents – Keeley Hawes as Julia Morley, trying to keep her dignity, despite Rhys Ifans as Eric Morley…  the obvious friendship between the two Miss South Africas that could only happen outside their country…

And above all, the steely determination of the final winner who seemed the only person in the world who saw it coming - and knew what it could mean.