Let Him Go is old-school film-making in the best sense. It’s based on a not particularly well-known novel, adapted by the director Thomas Bezucha, best known, if at all, for a quaint little film called The Guernsey Literary and Potato Peel Pie Society. 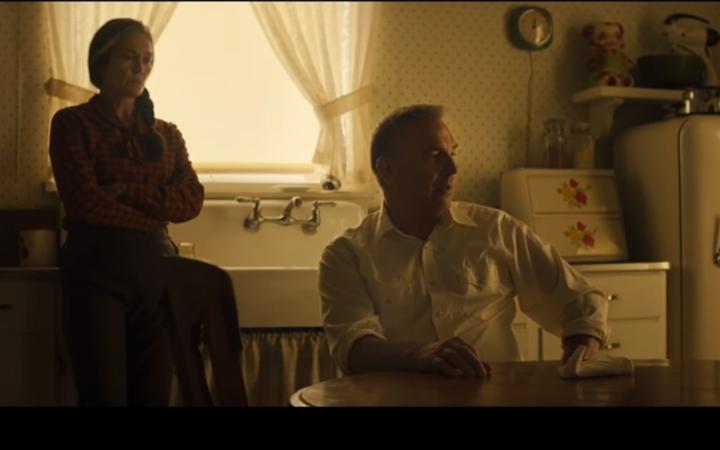 But it stars two genuine and attractive movie stars supported by a big-deal English stage and TV actress.

Margaret is horrified to witness Donnie mistreating both baby Jimmy and Lorna. And shortly afterwards, the family ups sticks and takes off without any warning.

Margaret decides Lorna and Jimmy need rescuing. And George decides to go with her to keep her out of trouble.

They reach the Dakotas, and make enquiries, Margaret pretending it’s a casual visit, George impatiently cutting to the chase.

And finally they find Donny’s bluff uncle Bill, who’s clearly been tracking them ever since they arrived in the state.

Bill drives them way out of town to the Weboy homestead, where they meet the real boss of the family, Blanche played by Lesley Manville.

Manville's hardly known for her work in American westerns – she’s just been announced as the next Princess Margaret in The Crown.  But here she effortlessly channels tough cookies like Bette Davis or Barbara Stanwick.

The air of menace from the family is palpable. Margaret and George are determined to rescue their son’s family, but it goes wrong, and it gets even worse as it goes along.

The Weboys are not inclined to let go of what’s now theirs.

Let Him Go is one of those stories that rests entirely on how much we want to go with the two leads. And the parts of Margaret and George couldn’t be in better hands.

Costner may have just the one thing he does – rugged decency – but then so did John Wayne, Randolph Scott and Alan Ladd before him.

And producer/star Costner is savvy enough to know that this is very much Lane’s movie. She’s the decent grandma who’ll do anything for her family, butting heads with Blanche, her evil twin.

I like Lane in anything anyway, but it’s nice to see what she does with a part that could have been a little one-note.

Like all westerns, there comes a moment when George and Margaret realise they’re not going to get any help from the authorities.

The Weboys own the town, they’re armed to the teeth and there’s nothing any strangers can do about it. Pack up your stuff and get out of town.

Well, nobody tells Lane and Costner what to do – not in their own movie. Needless to say, there will be blood, and Let Him Go is a reminder of how much fun a well-made, well-acted western can be.