Expat Kiwi movie star Sam Neill – still, I think, the only genuine movie star in the old Hollywood tradition we’ve ever produced – has had quite a busy year, Covid or no Covid.

Aside from Aussie dramas like Ride Like a Girl and Palm Beach, he’s been hard at work on the next Jurassic World epic – between lockdowns in the UK – and a bunch of self-made short films he’s called Cinema Quarentino. 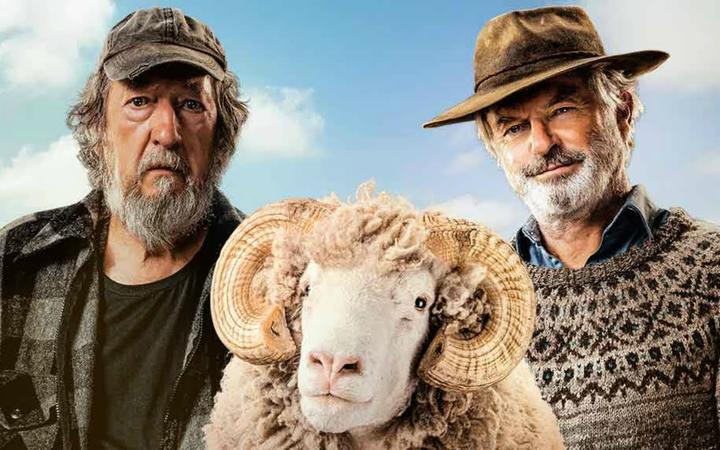 But before lockdown he also managed to make Rams.

It tells the story of two elderly brothers – Colin and Les – who obsess about sheep, and in particular the annual ram competition.

Neill plays Colin, who’s the slightly more gregarious brother. He certainly seems to have some life outside his sheep flock, and his prize ram.

Brother Les – played by Michael Caton of The Castle fame – is withdrawn to a possibly clinical level.

Anywhere but such a sheep-focused community, he might be considered “on the spectrum”…

But every year it’s usually Les who wins the ram competition, and Colin has to bite his tongue.

Mind you, this is something he’s been doing for quite a while.  Despite living next to each other – even sharing the same sheepdog –  they haven’t spoken to each other in decades.

But then tragedy strikes. A serious illness hits Les’s prize ram, and because the ram has been servicing all the other flocks, that means all the sheep in the district have to be culled.

The pair who take it worst are Colin and Les.

The farmers may be reimbursed, but it’s not the money, says Kat, the Pommy vet – played by Miranda Richardson, rather good as a woman negotiating the prickly ways of the bachelor sheep-farmer.

So which brother will kick hardest against the pricks?

I should say that the trailer for Rams is a little misleading.

It looks like a slightly wacky romp – the sort of film you’d expect from Scotland or Ireland, where the local farmers run rings around the city slickers from the Department.

But if you’ve seen the original Iceland film – or indeed, if you’ve seen any rural comedy-dramas from Scandinavia – you’ll know our Norse friends don’t really do wacky.

And the film, while offering plenty of Aussie hard-case humour, is as much about broken family relationships as it is about sticking it to The Man.

Neill in particular is terrific, balancing the comedy and the sentiment.

In fact, it’s pretty obvious that if Neill hadn’t been available, there’d probably have been no film. How many other Hollywood stars actually farm sheep at home?

He and Caton are totally believable as dysfunctional brothers.  And director Jeremy Sims is smart enough to play the story - not as a rural comedy, or even as a slice of social realism, but as an outback fairy-tale.

Let’s face it, once you bring sheep inside the house, realism can go out the window.