Review - Into the Darkness

World War Two is undoubtedly the most filmed conflict in history. Each time a new movie on the subject comes out, it’s a reminder of how many different stories have been written about those six years. This time the story is told from the point of view of Denmark. It’s called Into the Darkness. 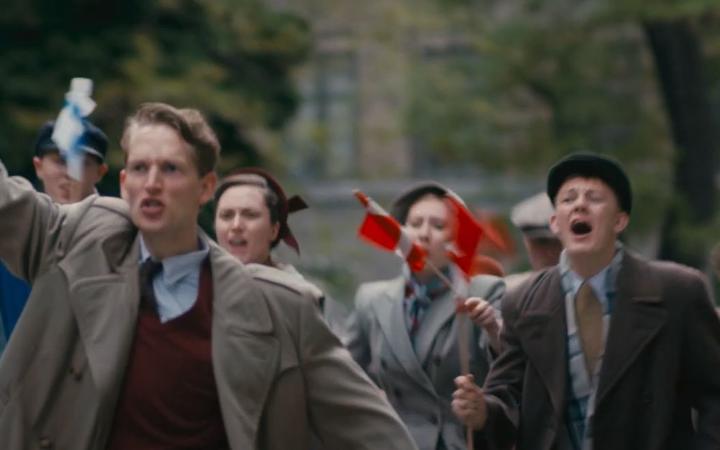 Into the Darkness opens on a family gathering – the wedding anniversary of Karl and Eva. As they come out of their house to greet their guests and family – three sons, one daughter, and Karl’s son from a previous marriage, Michael – they’re interrupted by low-flying planes dropping leaflets. War has broken.

No sooner has it started than it’s pretty much over. The little kingdom of Denmark is no match for the mighty Third Reich and surrenders almost immediately. The nations of Scandinavia, according to this movie, dealt with the German invaders in different ways.

For instance, Sweden declared itself neutral, while Norway was ruled by a puppet government, led by the notorious Quisling. Denmark attempted to steer a path between the two – not rocking the boat, but not actively assisting the German war effort.

Meanwhile, the two youngest brothers are more interested in jazz than politics. Sister Helene falls in love with a dashing U-Boat captain, to her mother’s dismay.

Mother Eva comes from Old Money and feels free to say what she likes about the invaders. But for her husband Karl, it’s not so simple. With the British market gone, he’s forced to do business with the German government and they want to modify his electronic goods for war work.

The pressure on Denmark’s conscience is what Into the darkness is mostly about. Like similar stories from then-occupied countries – France, Czechoslovakia, the Netherlands – even Germany itself – the full scope of the Nazi regime dawns slowly.

A Jewish couple – friends of Eva – arrive one night desperate for one of the family to ship them to neutral Sweden immediately. The family try to reassure them – this is Denmark, not Germany. Everyone is equal here, Danes and Jews. Until, of course, they’re not.

The stories of nations under occupation do have common elements. Some citizens collaborate with the occupiers, anxious to stay onside with the winners. Some go underground and risk life and limb in the Resistance. Most keep their head down and survive, making an increasing number of compromises along the way.

Into the Darkness is workmanlike, rather than ground-breaking, but the best bits of the story are those that are most Danish.  What was life like under occupation in that country?  How do you maintain a safe distance from the occupier while still keeping your workers employed and your family fed?

As always, Into the Darkness asks the one question that most of us, thank God, have never had to ask ourselves.  What would I do in that situation? Would I have behaved as badly as the worst, or as well as the best? It’s not called “The Darkness” for nothing.