Four Kids and It

A well-bred family film called Four Kids and It has all the signs of an English version of ET – family discovers mysterious magical creature, keeps it hidden from the grownups, and along the way learns a valuable life lesson.

But its origins were long before Steven Spielberg.

Originally it was a popular Edwardian children’s book called Five Children and It – regularly filmed and televised - and more recently subject to a sequel/tribute by distinguished modern author Jacqueline Wilson. 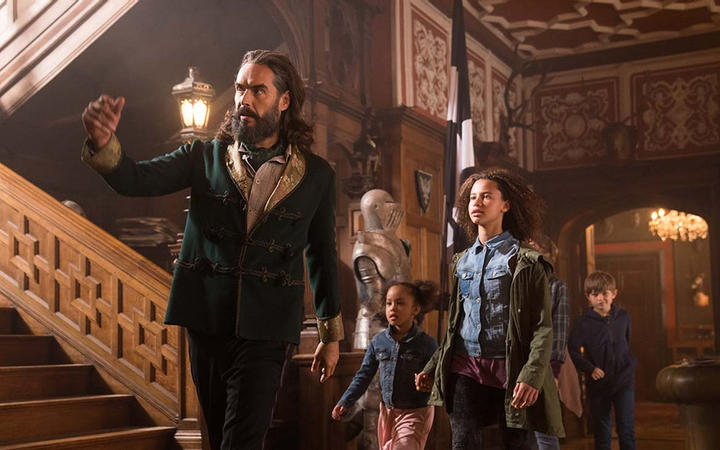 In the film version, Four kids And It, we meet Ros and Robbie, off on a holiday with Dad.

Coming from the other direction, little Maudie and teenage Smash – don’t call her Samantha – are heading to the same destination with their mother.

It’s a potentially blended family – like it or not. The four kids resolutely refuse to get on with each other, even in the picturesque setting of an idyllic little beach.

But what’s that mysterious rippling under the surface of the sand? They find they’ve captured a Psammiad – a floppy creature with a very familiar voice.

It’s Sir Michael Caine of course - not an actor we normally associate with juvenile fantasy, but who’s clearly willing to give it his best shot.

And, this being 2020, there have to be trendy, meta-references to the first book, and the fact that these events are happening a century after E Nesbit’s original.

But the basic idea remains the same – the Psammiad offers one wish to each of the children, but it runs out at the end of the day.

However, the wishes have changed considerably. Now they include time travel and pop stardom.

A movie clearly needs a little more than a series of wishes going wrong though.

We need a baddie – stately home-owner Russell Brand, who seems to know more than he’s letting on.

And underneath the fantasy shenanigans, the story is underpinned by a more serious wish common among children of divorced parents. How can we bring Mum and Dad back together?  Could our temporary wishes be used to make permanent changes?

But I’m not sure that the various elements of Four kids and It combine as well as they might have in a book.

Brand is certainly in a little world of his own, chewing the scenery as a pantomime villain.

Caine as the wish-granting Psammiad plays it comparatively straight - albeit with rather more fart jokes than there used to be, and a tetchy note in his voice each time a wish goes awry.

You keep expecting him to complain “You were only supposed to blow the bloody doors off” after yet another explosion!

Four kids And It is an undemanding way to spend a blustery Sunday afternoon with the kids, but occasionally the tonal shifts grate a bit.

Ros and Smash pining for their missing parents is rather at odds with Brand rolling around in a pile of gold coins like a modern-day Scrooge McDuck.

And for all the fact that the Psammiad keeps threatening the Four Kids with the “consequences” of all these wishes, the end result remains merely pleasant, meandering and – yes – inconsequential.