Hope Gap is the directorial debut of playwright, and screenwriter William Nicholson.  He arrived in the 1980s with a touching TV drama called Shadowlands, later a movie starring Anthony Hopkins as Narnia’s C S Lewis in love.

Since then Nicholson’s been a writer for hire on films like Gladiator, Les Miserables and Everest.   But Hope Gap started out as his own Tony-nominated play called The Retreat from Moscow. 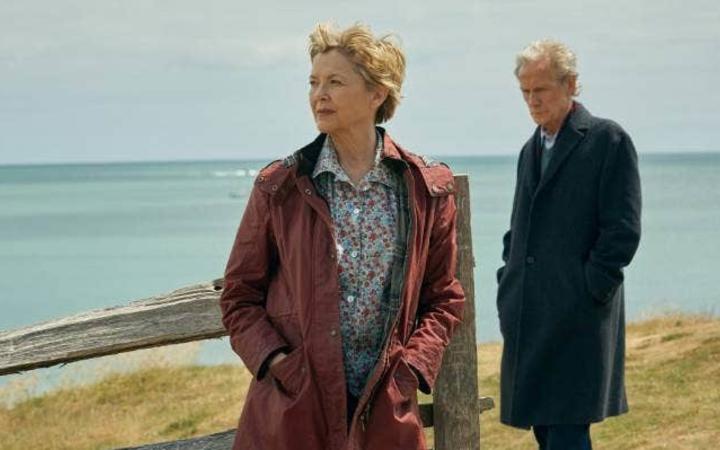 Neither the titles Hope Gap nor The Retreat from Moscow are to be taken literally though. They’re both rather tortuous metaphors for the dying relationship of Grace and Edward, as seen through the eyes of their 20-something son Jamie.

You can’t complain about the quality of the cast – even if none of them is exactly stretched. Front and centre is Grace, played with all the stops out by Annette Bening.

She spends much of the first act being annoying, then feeling aggrieved when people are annoyed.  Her defense is she’s trying to get a response, particularly from her bland and withdrawn husband Edward.

Edward is essentially every Bill Nighy character you’ve seen in the past ten years, but without the jokes.

And since Nighy’s saving grace is he’s often very funny, what we’re left with here is just the brooding glumness.

And playing their son Jamie as a sort of younger version of the Bill Nighy character is Josh O’Connor – so good in TV series The Crown as a slightly flattering portrait of the young Prince Charles.

Since the two men are largely defined by what they don’t have, that leaves us with Grace, who almost defies Annette Bening to make something sympathetic out of her.

On a good day, with a good script and a good director, Bening can be a glorious force of nature.

I don’t know how good the script of Hope Gap was when it was a play, but now it seems to be a bunch of repetitive scenes, held together by a voice-over narrative from O’Connor.

I’m not one of those purists who criticise voice-over narrative as somehow “uncinematic”.

But a bad example is when it keeps telling you something you’ve seen no other evidence for.

We’re told Grace is a poetry fan, compiling a collection for her own amusement. She’s also a devout Catholic, which allows us to see why her reaction to Edward’s decision to leave is so rigid.

A play forgives – in fact, often requires – a certain amount of rather leaden explanation.

But a film needs to be lighter on its feet and give us some better reasons to sympathise with three emotionally cut-off characters, than simply being told to.

I couldn’t warm to either Nighy or Bening this time, to my surprise – I usually admire both of them in most things.

O’Connor was better – possibly because his character was clearly close to Nicholson himself.  The story of Hope Gap seems to have been based on the relationship of his parents.

But in the end the fault lies with the film direction.   Nicholson – like many writers – isn’t a natural film-maker.