Two of the famous Six or Seven Plots that Hollywood scriptwriting teachers like to propose are, first, someone sets out on a journey, and second, someone rides into town.

The Quarry uses both of them. It certainly opens with a man leaving a burning house and heading away with some unanswered questions. 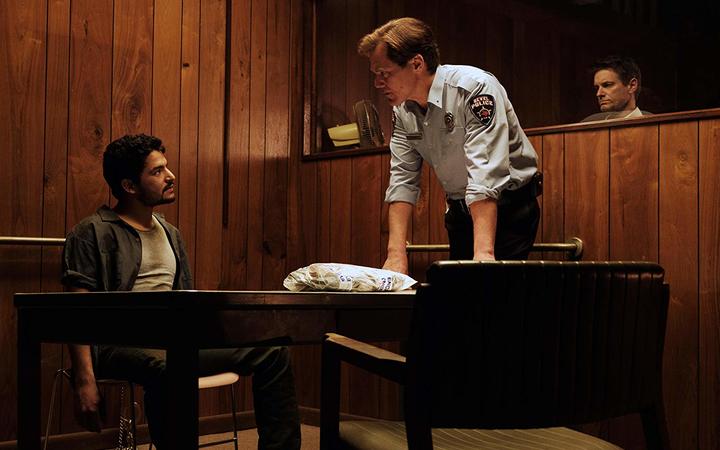 Along the way, he’s found by a travelling preacher on his way to a new job in a small town in West Texas.

But at the quarry just outside the town, there’s trouble.  The preacher is killed, and the lone traveller takes his name and his job.

So, from the start there are more questions than answers. How come the unnamed traveller, now going by “David Martin”, can fool the parishioners of the church?  He certainly doesn’t seem to have much religious background.

In fact, his preaching is noticeably unorthodox – and frankly, self-serving.

The fake Martin is put up at the guest house of a woman called Celia, who seems to have her own issues with the town.

Not least because she’s sleeping with the local chief of police, played by Michael Shannon.

Shannon always seems to be wrestling with pain under his rough exterior. The Chief is immediately suspicious of the Reverend – played by Shea Wigham as a man with more than one secret.

Who is he, where did he come from, what was the burning building, and why is there a wanted notice up on the police noticeboard, unspotted by the Chief?

The Reverend runs into Celia’s two cousins, and his fate becomes entangled with theirs, while the Chief starts sniffing around all of their pasts.

In other words, The Quarry is a modern western from the writer-director of TV equivalents, Scott Teems.

Like any sort of western, it depends on us being intrigued by the mysterious stranger who’s ridden into town, and the conflicted town lawman trying to solve the mystery.

The Quarry is more successful in the latter task. Shannon is always a compelling presence on the screen, with his permanent expression of having bitten into something sour.

And though the story doesn’t give him quite enough to work with, it’s interesting seeing what he does with what he’s given.

Wigham as the Lone Stranger is less fortunate – particularly since they can’t decide whether he and the Chief are going to be rivals for the hand of the disgruntled Celia.

Even in the dustiest western, the characters can’t all be dark and mysterious.  Somebody’s got to be pretty much what you see.

That said, in a world of B-movie thrillers, old-folks romance and undernourished Netflix fare where we’re currently residing, an old-fashioned western is a welcome addition, I suppose.

The Quarry is straight out of the Western packet, with sin and redemption, two strong men at war with each other and themselves, and a glamorous woman with not quite enough to do.

Will there be blood?   Will all be revealed? Will it end up with someone riding – or at least travelling – into the sunset? At least with a western you know the answer to all three of these questions going in.