Hip hop legends The Wu Tang Clan based a lot of their music on films – their name derives from an old kung fu movie.  It’s not surprising then that the main man, who goes by ‘The RZA’, should aspire to direct some himself.

Cut Throat City, his third feature, is set in New Orleans, immediately after the disastrous Hurricane Katrina in 2005. 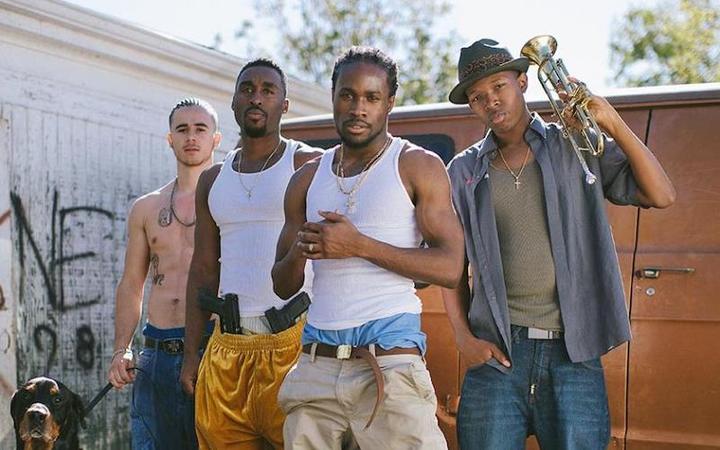 It became a political scandal when the government was so slow in repairing the damage caused by Katrina.

The perception was that all the support money from FEMA – the Federal Emergency Management Agency – went to the white neighbourhoods, or the tourist-supported French Quarter.

People who lived in the under-privileged Lower Ninth Ward could expect very little. So that’s the political underpinning of Cut Throat City.

And the story is about four young men who live in the Lower Ninth. We meet them at the wedding of one of them – James, a would-be artist.

Artist in this context means he aspires to draw graphic novels, and his magnum opus is called Cut Throat City – an allegory in which a plucky gang from the street takes on and defeat a horde of white supremacists.

Real life proves to be rather less cut and dried.

James’s friends include Miracle, the neighbourhood’s least successful drug dealer, Junior the Creole dog breeder and Dre a musician with no gigs.

With no money coming in from FEMA or anywhere else, they decide that crime may be the only thing that pays.  So, they go and see Cousin, a relative of James’s wife.

Drug-dealer Cousin may be several steps up the crime ladder from James and the gang, but he’s a small fish in a big pond.

Nevertheless, he sees himself as a businessman, like everyone else, pursuing the American Dream.  Which means money.

Cousin offers James, Dre, Junior and Miracle a job – to rob a local casino. In and out, what could possibly go wrong, he says?

The rest of us, less brainwashed by cinematic shoot-‘em-ups, may possibly wonder what could go right? But by then the quartet are already doing it.

Things go smoothly for about five minutes, before they don’t. The police arrive – suspiciously promptly – and start shooting.

But despite the hail of bullets, curiously nobody seems to get hit.

You assume this is merely going along with the standard action movie clichés, but Cut Throat City is a little smarter than that.

And before long, tragedy hits the gang, while in the background more characters start making their presence felt.

And while Cut Throat City never quite has the budget or the chops to match its role models The Godfather or the films of Tarantino or Spike Lee, it’s certainly a cut above your standard Netflix B-movie.

There are colourful cameos from the likes of Ethan Hawke as a city councilman, Terrence Howard as a gangland tsar called The Saint, and most of all, Wesley Snipes as James’s ne’er-do-well dad.

Taking a leaf out of Spike Lee’s book, director RZA blends politics and some thought with the entertainment.

Can there be any way out for these guys, he asks, or are they doomed to follow the predictable path, squeezed between black crime and white racism?

Like most thrillers, Cut Throat City tries to have it both ways – throwing in an unnecessary third ending to boot.

As RZA says at the start of the film, it’s a story, not a lecture. But with a sting in the tail – the fact that – in real life - it took over seven years for the Ninth Ward to finally get running water or electricity.