For many years there was a safe rule of thumb with Keanu Reeves movies.  If he uttered a surprised “Woah” in it – the first Matrix, for instance, and the Bill and Ted movies of course – they were pretty good.   When he didn’t – the second and third Matrix films, or Much Ado About Nothing – they were less so. 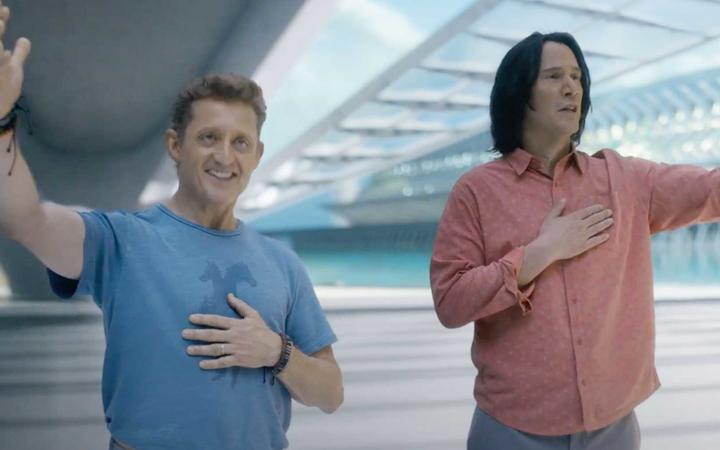 But does anyone want to see middle-aged versions of these characters, still in their try-hard band Wyld Stallyns – spelt with plenty of 1980s letter “ys” in the name?

What was endearingly knuckle-headed in their youth, must surely be a bit tragic now – a couple of Dad jokes brought to embarrassing life?

The new film has ominously taken decades to make.  But whatever you may think about the idea, it’s certainly in the right hands – the original writers of both Bill and Ted’s Excellent Adventure and Bogus Journey, Chris Matheson and Ed Solomon.

Thirty years may have passed, but very little seems to have changed.

Bill and Ted are still married to the medieval princesses they picked up on their time travels.

They’re still struggling to fulfill the prediction of their mentor Rufus, played by the late George Carlin, to come up with a song that will unite the world in peace and harmony. And their families still won’t give them a break.

The only thing they’ve managed to produce over the years is two equally feckless daughters Thea and Billie – that’s right, they named them after each other.

One day, at their lowest ebb, Rufus’s daughter Kelly arrives unexpectedly with news.

Bill and Ted are whisked off to another dimension where they are told by yet another Great One that their world-unifying song needs to be produced in an hour or the whole of reality will be destroyed.

No pressure then. But Bill and Ted come up with a possible solution.

They take off in a spare time-machine – don’t ask – and look up future versions of themselves with a view to stealing the Great Song from them.

But it’s not as easy as it looks. Each future Bill and Ted is worse than the one before – including a couple of muscle-bound convicts whose song is mostly about death and giving up.

Meanwhile – it’s a time-travel movie, so everything is “meanwhile” in one way or another - Bill and Ted’s daughters decide they have to help their dads.

Fortunately the girls have access to their own time machine – or maybe it’s the same time machine in a different dimension.

The daughters’ plan is to form the Greatest Band Ever to back up Bill and Ted when they finally produce the World-Uniting, Reality-Ensuring Song.

Yes, that is Mozart joining them on keys.  I won’t spoil the film by naming the other members, other than to say that Death, the Stallyns’ old bass-player, makes another appearance.

Now, I’m not sure if anyone has noticed that – even for a time-travel comedy – the story of Bill and Ted Face The Music mostly hangs together by a thread.

Coming as it does on the heels of the over-plotted Tenet, in many ways this is an anti-Christopher Nolan film, that only works because of the goodwill of everyone concerned. Especially the audience.

At the start of the show I wondered who in their right mind such a bizarre proposition as Bill and Ted Thirty Years On could possibly appeal to?   And to my embarrassment I realized it was me.

I loved every minute of it, partly because it sent me on its own time-machine back to the innocent days when two lovable doofuses could solve the world’s problems by a joyful “woah!” and some judicious air-guitar.

If the words “Bill and Ted” encourage an immediate, unplanned smile, you’ll probably love it too. And for the rest of you, all I can say is “be excellent to each other”.  And “party on dudes”.

Pretty good advice anyway, but particularly in these rather bogus times.