23 Walks is almost alarmingly slight – the tale of two 60-something dog-owners brought together by their pets. Henry is Fern’s frisky terrier, Tilley is Dave’s gentle German shepherd.

Fern is played by familiar face Alison Steadman who’s been in hundreds of TV series, from the Colin Firth Pride and Prejudice to the original Singing Detective. 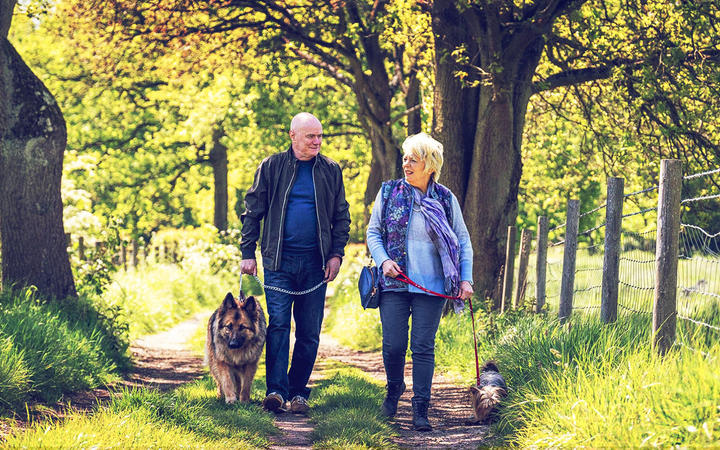 Dave Johns’ CV is shorter, but it contains one stellar role. He was Daniel Blake in Ken Loach’s award-winning film of that name.

The character of Dave is very much cut from the same cloth.  Like Blake, he’s Geordie, working class, strapped for cash, and regularly falling foul of the council.

Fern, by contrast, is middle class and divorced. She finds it hard to get on with people, particularly people with big German Shepherds. But one walk leads to another.

The pace of 23 Walks is gentle, counting off the pair’s growing relationship by the number of walks on the common.  Fortunately, director Paul Morrison stops counting before it becomes annoying.

The downside of a pace this gentle is you start to wonder if anything is ever going to happen. He’s a widower, she’s divorced, they get on, their dogs like each other. What’s the problem?

But not everything is as it seems, and nobody reaches their sixties without accumulating a certain amount of baggage.

Needless to say, obstacles mount up, true love fails to run smooth, and even the dogs run into problems along the way.

But, as always in these gentle, grey-haired romances, even the most intractable issues can be addressed with a bit of give and take.  Without wishing to be a big old spoiler, let me say it mostly all works out in the end.

The only reason anyone would care whether it works out or not, of course, is the charm of the protagonists.   And there’s no question that they’re both in very good hands.

Alison Steadman may do much of the thespian heavy lifting, but Dave Johns is as effortlessly likeable as he was in I Daniel Blake.

Whether he’s cooking Fern a meal or teaching her Spanish, Dave’s the one we most want to get a happy ending – the happy ending he was cruelly denied in I Daniel Blake, I suppose.

23 Walks also benefits from the lovable double act of Tilley and Henry, the sweetest pair of dogs since Lady and the Tramp.  Which 23 Walks tends to resemble more than once.