Nobody could accuse English writer-director Michael Winterbottom of resting on his laurels. Immediately after – or possibly during – the comedy-drama The Trip to Greece with Steve Coogan, Winterbottom’s already made another film, also mostly set in Greece, and also starring Steve Coogan.

The trailer for Greed has confused some audiences who like to know in advance whether they’re being invited to watch a scathing attack on an unscrupulous multi-millionaire, or a congratulatory puff-piece - the sort of thing Sir Richard Branson might drum up. 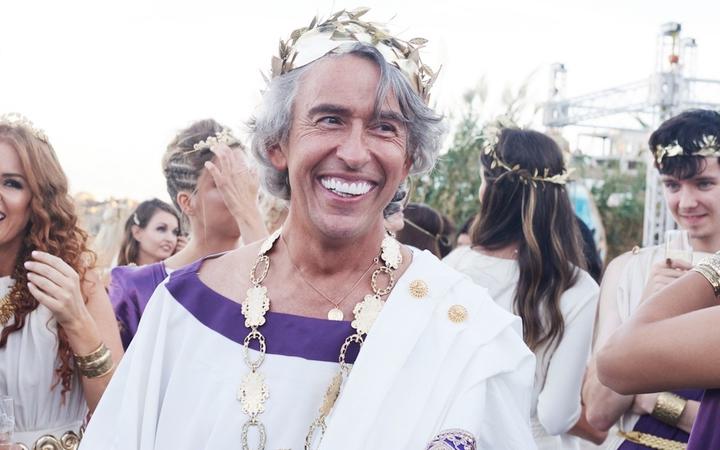 Actually, there are several similarities between Branson and the fictitious Sir Richard McCready – nicknamed by the tabloids “Greedy” McCready, for obvious reasons.

McCready made his billions in the rag trade, aided and abetted by his equally mercenary wife - and now ex-wife - Samantha, played by Isla Fisher.

The tag-line for Greed is irresistible –  “the devil is in the retail”. But most of the action takes place away from McCready’s high-street stores, and at his tax-haven mansion on the Greek island of Mikonos.

He’s throwing himself a birthday party, and everybody’s coming, whether they like it or not.

At the same time, McCready is being trailed by his biographer Nick, played by David Mitchell.

Nick’s tasked with getting everyone in Sir Richard’s life not only to express how much they love him, but actually to say “Happy Birthday” on camera. Even people working in his sweat-shops in Sri Lanka.

Well perhaps not exactly “dear”. Even Greedy McCready’s hard-nosed mother – played as a sort of Irish Poison Dwarf by the fabulous Shirley Henderson – has hardly a good word to say about him.

Or about McCready’s offspring who are even shallower than him, just not as successful.

And on the outskirts of the action are all the people hired and underpaid to boost McCready’s ego.

There’s no public relations disaster, he thinks, that can’t be overcome by a public relations triumph.  In this case, one involving a real lion, to make up for the shortage of real celebrity guests.

This is a snapshot of today’s robber barons – the people who dodge taxes everywhere they go, renege on every deal and rip off the poorest people in the world because they can.

In its way Greed is just as committed to bringing them down as anything by Ken Loach.

The difference is that Loach tells his stories entirely from the point of view of the underdogs - the people who suffer most under a grossly unfair system that no government – left or right – seems able or willing to dismantle.

By contrast Winterbottom shines a light firmly at the people benefiting – the celebrity jet-setters who live only for fame and money, even if they’re less sure what to do with it once they’ve got it.

Coogan and Fisher are very convincing as today’s glitterati - sipping champagne and sniping at each other’s plastic surgery.

This is greed in its purest form. People like the McCreadys don’t want anything specific, they just want more.

And they don’t understand anyone who thinks that simply wanting more is somehow not enough.