White Riot deals with events over 40 years ago, but it often sounds depressingly contemporary. Britain in 1967 had been called the Summer of Love.  Britain 1976 had become the Winter of Discontent.

There were strikes and angry protests in the streets. There was terrorism. There was the hideous National Front. And suddenly there was punk. 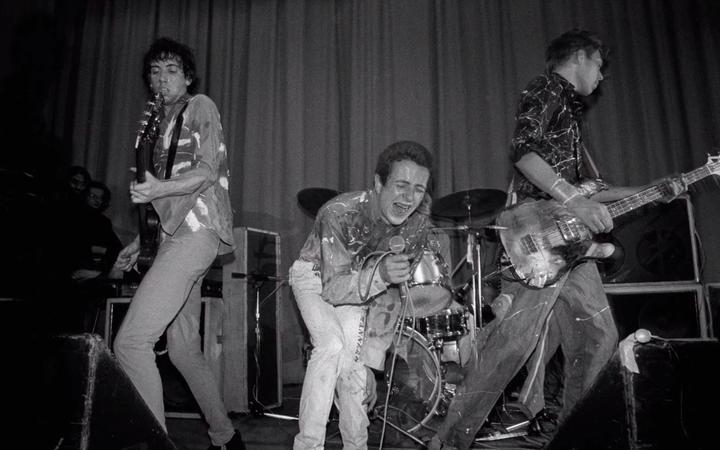 In the States they preferred to call it punk rock, but in London it was just punk, and it came in several flavours.

There was pure anarchy, led by the Sex Pistols. There was social justice, championed by the Clash. And there was something else…

Punk had a huge following amongst the National Front kids.  And the people who’d originally discovered the punk bands – fiercely anti-racist and left-wing – thought there was an opportunity here.

Show these disaffected kids a better way through music.

All a little naive, especially in 1976. You have to remember who was leading the right-wing attitudes in Britain.

Enoch Powell was a very high-profile Conservative politician when he started shaking his fist at immigrants. And he was joined by other, more distressing figures – among them David Bowie and Eric Clapton.

So, fighting rock superstars with punk yobbos, came an outfit called Rock Against Racism, whose leaders tell their story in White Riot.

Red Saunders was a freelance photographer for the NME.  Roger Huddle was a type-setter. And their office manager was someone who simply went by “Irate Kate”.

Between them, Rock Against Racism set up concerts – offering a blend of white and black bands – and put out a give-away news-sheet called Temporary Hoarding.  The concerts backed the activism, the activism publicised the concerts.

And suddenly a lot of people began to realize just how dangerous the National Front was.

Originally treated as a sort of joke, mini-Nazi Party, with as much credibility as Screaming Lord Sutch’s Monster Raving Loony Party, the Front became scarily omnipresent.

Focussing the mind was the fact that there was an election on its way, as the exhausted Labour Government went to the polls, and there were fears the National Front might even get into Parliament.

It was a challenge to the Rock Against Racism crowd, who by now included the Clash, of course, but also X-Ray Spex, Pauline and the Penetrations, and the always-welcome Tom Robinson.

White Riot reminds us that, for black artists, it was more than just being able to play where and when they wanted to.

They were constantly in danger from National Front skinheads, with very little help from the police whose behavior at the time came under increasingly critical scrutiny.

White Riot comes to a head with Rock Against Racism’s finest afternoon – a march from the centre of London to Victoria Park and one of the biggest concerts of the year.

The Establishment was skeptical – who do these punks think they are?

But the end result was a triumph, albeit a temporary one.  It was hailed as a victory for “people power” when subsequently the National Front was trounced in the polls.

But sadly, so were a lot of other people. Margaret Thatcher won that election, and power shifted from the idiot right wing of the National Front’s skinheads to the rather more insidious right wing of the neo-liberals.

Forty years later, these battles are still going on.