Technology in movies is very rarely optimistic, even among today’s tech-savvy audiences. The brave new worlds of the early sci-fi utopians have long given way to the threat of mechanical devices that are smarter, more powerful and less conflicted than us. 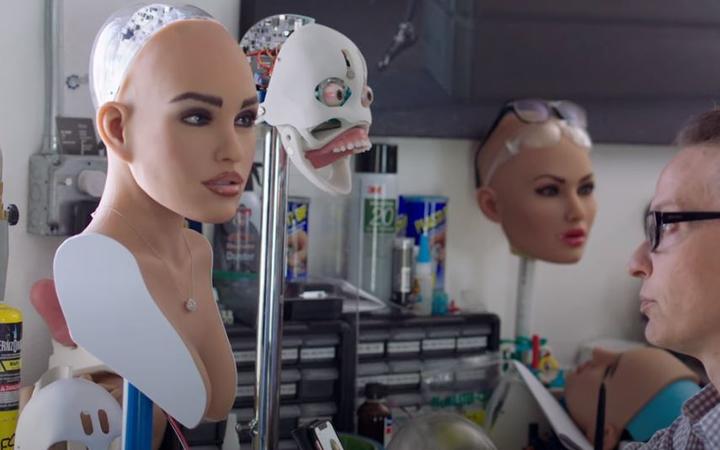 A still from the official trailer of Machine. Photo: Youtube

Think of Artificial Intelligence – AI – and it’s hard not to start thinking of the Terminator.

A new documentary, Machine, attempts to reassure us that we’re not likely to be hunted down and killed by robots anytime soon.

But, in fact, that’s not what we worry about most. We worry about being made redundant, that machines will be so smart that they simply won’t need us anymore.

In many ways, Machine is most effective, to nervous Luddites at any rate, when it tells us what a machine – be it a robot, a gadget or computer software – can and can’t do. One leader in the field thinks robots are mostly good at cleaning floors.

That’s not all machines are doing these days. The documentary lists the dazzling array of tasks we – or our representatives – are employing them to do.

The film’s opening quote sounds a warning from the father of the modern computer, Alan Turing. “There’s no human characteristic”, he said “that can never be imitated by machines”.

And to prove it, we see a Chinese grandmaster of the fiendishly complex game Go being trounced by a computer.  At the end, the poor man looks like he’s let the human race down.

But is game-playing actually thinking? asks Machine, which goes on to look at what advanced technology could do, and in some cases, already is doing.

Robots are used as surrogate friends – they download real people’s emails and texts, then turn them into algorithms.   The race to the driverless car is paralleled with a rather scarier race for pilotless bombers and tanks in wartime.

The effects of AI are initially impressive - on war, health, transport and the media. Who needs an old-fashioned newspaper when your phone generates handy news-bites every second?  To the credit of Machine it actually does ask this question, and attempts to answer it.

The advance of human ingenuity in less than a century is incalculable.  For many, it far outpaces previous game-changers - the Internet, the Industrial Revolution, the invention of printing, and so on.

The big question remains:  just because you can do something does that mean you should?

Machine talks to some very smart people – technologists, scientists, philosophers and business-people.  And while they don’t always agree, they’re clearly all putting an encouraging amount of thought into it.

The underlying theme of most sci-fi on the subject of robots and machines is this: yes, the machines are getting smarter, but at the same time people seem to be getting dumber.

To pick an example from Machine, the reason that driverless cars are taking so long to get off the drawing board, apparently, is greedy manufacturers are loath to add expensive safety precautions.

The fact is, offered the choice between important and useful technology, and shiny and popular new techno-gadgets, it’s probably no contest which way AI businesses will go.

If you want to feel both dazzled and somehow superior at the same time, there’s something for both the tech-head and the dyed-in-the-wool robo-skeptic in Machine.

And the final message of the factual Machine is the same as the fictional Blade Runner, I Robot and various Terminators.

If you want Artificial Intelligence to be useful, you’re going to have to apply some old-fashioned human intelligence to its development.