Multiple academy award winning Edward Norton hasn’t been what you might call prolific recently since Birdman in 2014 his appearances have been limited to easy-paying voice work and cameos in films by pals, mostly Wes Anderson.

In a recent interview he spoke about his work investing in high-tech start-ups and his progressive and environmental activism. 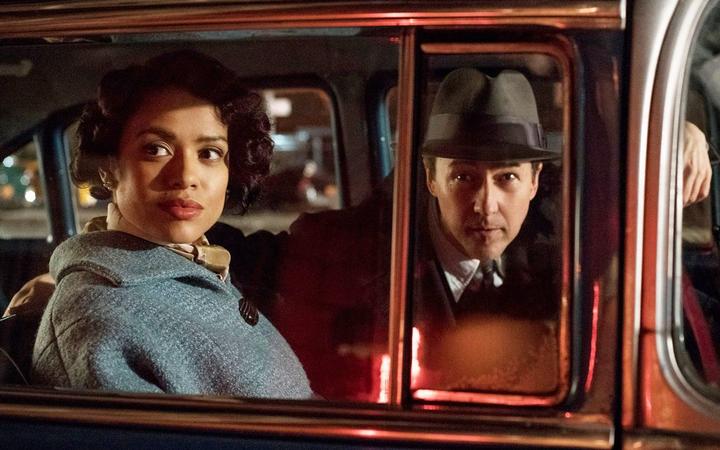 But he’s also been spending that time, and much of the previous fifteen years to be honest, developing an adaptation of a 1999 detective novel, Motherless Brooklyn by Jonathan Lethem.

Finally, late last year, the film was finished and premiered at Telluride in September.

It really is a passion project for Norton who produced wrote and stars in it. Along with a cavalcade of recognisable faces many of whom have worked with Norton in the past.

That address book got quite a work out in the production of Motherless Brooklyn.

Lionel and a colleague, played by Ethan Suplee, are tailing Minna after a meeting that could go wrong actually does.

They lose him on the far side of the Brooklyn Bridge when the guys who have Minna can use an official lane and they have to wait for the tolls.

By the time they catch up Minna has been shot with his own gun and they are too late to get him to the emergency room.

The rest of the film is about Essrog’s quest to find out why Minna was killed and find him some kind of justice.

On the way he discovers layers of corruption and marginalised communities being forced out of their homes in the name of redevelopment and progress.

Now the interesting character trait that Essrog has is Tourette’s Syndrome, that disorder that prompts a person to blurt inappropriate comments and other socially awkward tics.

While Norton’s Essrog has to explain himself to strangers it’s interesting the situations he finds himself in where the disorder is relieved.

It emerges as a response to stress, but as the film goes on, and Essrog finds himself as a central player in the investigation, his confidence and self-worth grows and the effects of the syndrome diminish.

He’s also a bit of a savant, never forgetting a detail, remembering what everyone around him says. Very helpful for a private detective you might say.

The original novel was set in the present day, but Norton’s adaptation, from the very first time he decided to work on it, is relocated to the 1950s. His argument was that the hard- boiled, gumshoe world of private investigators, and the old school dialogue would have sounded out of place in the here and now.

But it also allows him to drive that investigation into the very real world of New York city planning inspired by a famous book from the 1970s called The Power Broker by Robert Caro.

But The Power Broker lifted the lid on the corporate grift and underlying racism that drove Moses’ developments and the film adds a layer of family scandal too.

Also featuring in the film is a version of the resistance to Moses, a character called Gabby Horowitz played by Cherry Jones, based on Jane Jacobs who campaigned to try and save Greenwich Village from an expressway around the time this film is set.

In fact there’s a sequence set around a famous demonstration at Washington Square Park that also featured in a recent episode of The Marvellous Mrs Maisel.

At 2 hours and 20 minutes goes on a few too many detours to be really effective, as if Norton wants to honour all the research that he’s done. The film wants to remind you of another great film about post war corruption, Chinatown. But Norton’s style behind the camera is nowhere near Polanski, even if his collaborators in the costume and art departments go all out to recreate New York in the finest of detail.

Motherless Children is rated M for language and adult themes .