For a while there was a debate within New Zealand's film industry over who we should be making our movies for, and how they should do it.

In the dark corner were the serious makers of would-be art-films, the Cinema of Unease, aimed at the world's Film Festivals. And in the wildly colourful corner, were the makers of cheap, cheerful genre pictures. Films with titles like Deathgasm.

It's not surprising that one of the champions of the grindhouse cult movies should be Sir Peter Jackson, who started out in that line himself, and 48 Hour Challenge's Ant Timpson, who currently carries the torch in the Incredibly Strange section of the Film Festival.

So the question is: Which would audiences prefer to see - quiet and earnest, or loud and stroppy?" 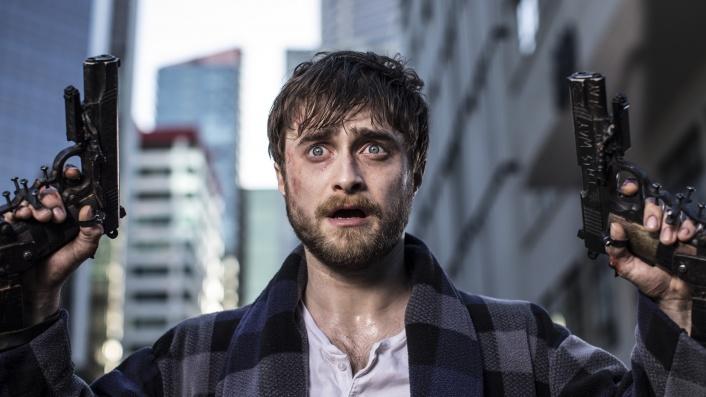 You'd think the answer would be a no-brainer - in more senses than one. Which is how I found myself heading to see Guns Akimbo, directed by Deathgasm's Jason Lei Howden.

Jason Lei Howden has been a visual effects artist at Weta Digital for years, working on everything from The Hobbit and The Avengers to Mr Pip and Abraham Lincoln Vampire Hunter.

I have to say it shows. Guns Akimbo certainly makes a modest budget go a very long way.

Like its predecessor Deathgasm, Guns Akimbo is rooted in the internet, social media, guns and rock 'n' roll.

And it's boasts a genuine movie star in the lead - Harry Potter himself, Daniel Radcliffe.

Like the star of another local thriller, Come To Daddy's Elijah Wood, Daniel Radcliffe seems to have leapt at the chance to mess around with his squeaky-clean image.

Here he plays Miles, an archetypal loser in a mythical American city. Miles works at a video-game house, in a world - as they used to say - where the biggest thing online is a game called Skizm.

It's a set-up not a million miles from The Hunger Games or Ready Player One - or if you've got a longer memory, the old Arnie thriller The Running Man.

This time, Miles falls foul of the Skizm people, and next thing he knows they pay him a visit.

It goes badly, needless to say, and when Miles wakes up he discovers that, not only has he been enlisted as a challenger in Skizm, but he's been armed in the worst possible way - two hand-guns have been riveted to his two hands.

So Guns Akimbo has now topped up the mixture with elements of Edward Scissorhands and a dash of the grizzly Saw series, as well as just about every video-game ever invented.

Miles is on the run, and his opponent is Nix, a sort of teenage Charlize Theron at her most scary, played by Australian star Samara Weaving.

You can certainly see why Jason Lei Howden made Guns Akimbo. Everyone behind the camera seems to be having a wonderful time.

The stunts are great, and anyone who can stage an endless car-chase in the usually jammed traffic of Auckland deserves some sort of a medal.

But you still wonder who it's for - especially when its shortcomings are built into the script. Every second shot seems to be of a bunch of millennial fans glued to their smart phones. They're certainly not going to the movies.

And I suspect anyone interested in Guns Akimbo are more likely to download it - legally or illegally - than join me at the cinema.

Which is probably why the queue outside my local multiplex was as short as it was, and I had no difficulty finding a seat inside. Pity really. In the end I enjoyed Guns Akimbo rather more than I was expecting to.