The old-fashioned whodunit comes and goes in and out of fashion.

Here it’s associated with the coziest sort of TV, where Miss Marple, Hercule Poirot and the police force of Midsommer and Brokenwood investigate their formulaic murders, and identify the culprit at the end. 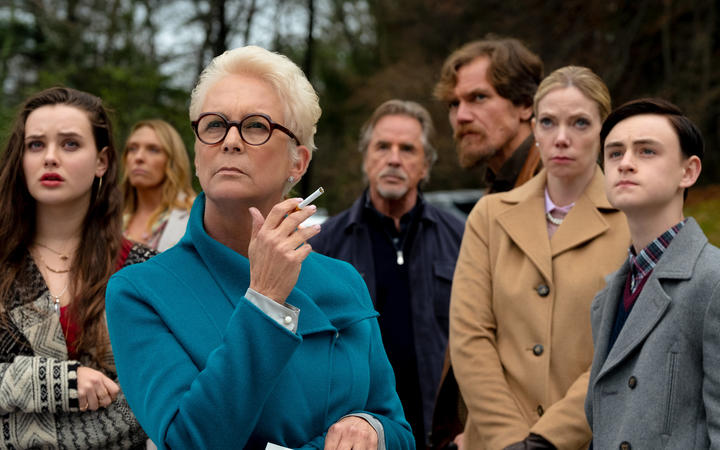 In the States they’ve mostly been replaced by serial killer thrillers like CSI, where the number of suspects is often reduced to just one, even as the number of victims expands to offer more clues.

But that’s not the story writer-director Rian Johnson wants to tell in Knives out.

What Johnson did to the film noir in Brick, and to the sci-fi, time-travel thriller in Looper, he sets out to do to the whodunit in Knives out.

Knives out lays out all the elements, then pushes them sideways.

The traditional Agatha Christie whodunit had certain very specific rules. There was a Victim, of course, there was the initial Suspect, usually exonerated by the Detective, assisted by his or her slightly slow Friend, who represented the audience.

There were a dozen or so Suspects. And at the end there was the Who who’d Dunnit, generally the Least Likely Suspect.

And Knives out offers all of the above, with a switch. Because the weakness of the trad whodunit, for modern audiences at any rate, is you have to wait so long for any explanations.

These days, no-one has time for that. So this time the explanations start coming early and often.

But first, who’s who in the whodunit? We open on the stately home of millionaire thriller writer Harlan Thrombey, played by Christopher Plummer.

He throws a big birthday party for himself, the whole family’s invited and at the height of the festivities he’s found with his throat cut.

The police are called, and along for the ride is an exotic private investigator Benoit Blanc, dripping with old-fashioned Southern charm.

The usually sinister Michael Shannon appears as the wimpy son, former Miami Vice cop Don Johnson is the useless son-in-law, while Jamie Leigh Curtis is his far better half.

Toni Collette is there, and so is former Captain America Chris Evans, playing possibly his stupidest, and most annoying character.

And as you’d expect, everything everyone tells Benoit Blanc is usually a lie.

Knives out, entertaining as it is, still suffers from the weakness at the heart of the whodunit genre.

The plots are generally so complicated, and dependent on so many unlikely coincidences and conspiracies, that even the most tenacious follower is likely to get lost sooner or later.

So in the end, you’re dependent on the entertainment value of the characters, rather than the devilish intricacy of the plot.

In Knives out, Rian Johnson clearly loved the genre so much he couldn’t fail to do it justice.  And he’s a smart enough director to ensure there’s plenty of fun for people who are less committed.

But at the end, like just about all whodunits, there’s a slight feeling of … ‘so what?’