Review - Portrait of a Lady on Fire

The French film Portrait of a Lady on Fire already comes bearing laurels.

Sandra Reid from the New Zealand International Film Festival was a huge fan, and so was the prestigious Cannes festival which awarded the film the Best Screenplay. 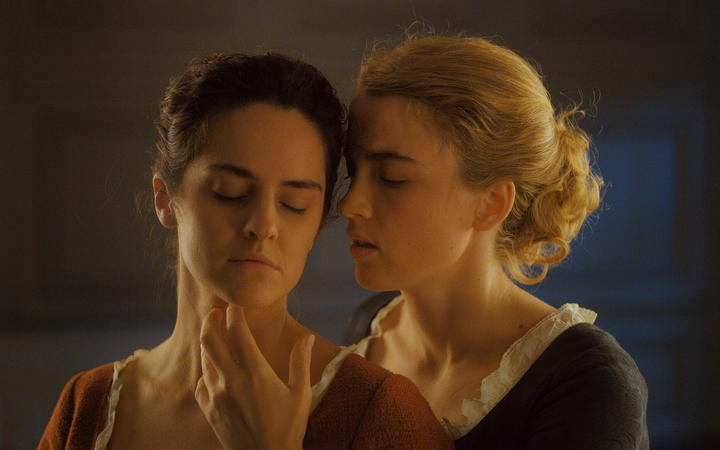 The film is almost entirely driven by women – from the writer-director Celine Sciamma to the all-female cast – and it’s a love story between two young women.  But that’s scratching the surface of Portrait of a Lady on Fire, set in chilly Brittany sometime in the late Eighteenth Century.

A portrait painter named Marianne is summoned for an important assignment.

The assignment is to paint the fiancée of a wealthy Italian aristocrat.  It’s an arranged marriage, and the count hasn’t actually seen Heloise yet.

So her mother needs a flattering portrait to persuade him he’s getting his money’s worth. But there’s a snag.

Heloise is resisting the marriage and refuses all attempts to paint her. A previous painter gave up because she wouldn’t pose for a portrait.

So Mum has a new strategy. She’ll claim Marianne is simply a companion for Heloise. She can spend all day with her, then at night secretly paint her from memory.

This is a situation filled with possibilities, particularly when Heloise’s mother is called away for a week, leaving them alone together in the house.

The attraction of Portrait of a Lady on Fire is not just the beauty of its protagonists – including the still luminous Valeria Golino as Heloise’s mother.

The film looks wonderful, using a wide range of natural light, inside and out.

This is a film about looking – secret looks while the other’s unaware, then increasingly bold and direct as the two women become more intimate.

And it’s also about memory, as Marianne retains moments with Heloise to recapture alone in front of an easel.

When Marianne decides to reveal to Heloise what she’s been doing, their relationship changes unexpectedly.

It’s no longer based on deception, but it’s still dependent on Marianne’s painting being good enough to encourage Heloise’s suitor to take her away forever.

There’s another element too – the ancient Greek tale of Orpheus and Eurydice, where an artist attempts to win back his love, only to fail at the final glance.

This story is usually told from the point of view of the bereft Orpheus.  But what of the woman? How did Eurydice react to the end of the affair?

Portrait of a Lady on Fire – the title has more than one interpretation – is an equally intriguing, and ravishing experience too.

Yes, it’s very much about the female gaze for a change, but there’s much here for the ear as well. The music is extraordinary – often just female voices and hand-claps. But the whole film deserves all the awards it’s been receiving.