A couple of weeks ago, I wondered how much the choice of music tracks in a movie affects an audience’s enjoyment of the film?  Hit songs aren’t an exact science, and they’re just as likely to turn people off as get them on side.

And even when it’s a good song, there’s no guarantee that a mere movie star is going to be able to sell it. For that you need – well someone like Irish actress/singer Jessie Buckley.

The film is called Wild Rose, but it might just as well be called A Star Is Born. Jessie Buckley plays Rose-Lynn Harlan, whose driving ambition is to go to Nashville Tennessee and show Music Row what she’s got. 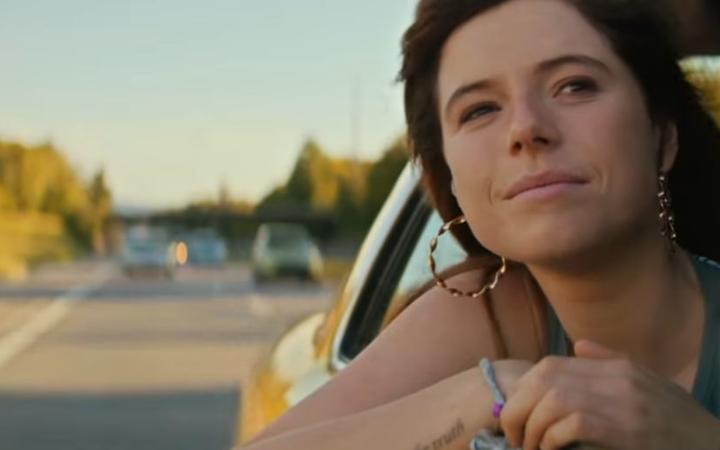 She goes straight to her mother’s place, where Mum has been looking after Rose-Lynn’s two young children.

Mum, incidentally, is played by Julie Walters who’s an asset to any movie.

But Dame Julie isn’t the point of the film Wild Rose.

We soon find out what that is when Rose-Lynn goes to her local country music club, sees an interloper singing with her band, kicks him off the stage by sheer personality and cuts loose.

The current fashion for musicals and near musicals like Wild Rose has demonstrated one thing. In the end it doesn’t come down to the brilliant script, or the wonderful acting or how well it’s staged.

It comes down to “Can the star hack it?” And boy, can Jessie Buckley hack it!

So that’s what Rose-Lynn starts with, and her task is to try and take herself to Nashville and get spotted. That takes money, and apart from singing, Rose-Lynn is strictly unskilled labour.

So she gets a job cleaning at the house of middle-class mum, Susannah, played by the wonderful Sophie Okonedo. For a low-budget movie, Wild Rose has lucked into a fabulous cast.

Susannah hears Rose-Lynn singing while she vacuums – they could probably hear her three blocks away when she hits those high notes!

And it turns out that - like all posh women - Susannah knows people who know people.  People like the legendary Whispering Bob Harris, the BBC’s country music man.

At the heart of the story is the question: what is Rose-Lynn prepared to sacrifice for her dreams?

Her two kids are already damaged by her time in jail, and the fact that they’re regularly dropped off with the neighbours whenever she’s got a gig. Mum is furious.

But she’s clearly got talent.  Star Jessie Buckley at full tilt is so good - jaw-droppingly, laugh out loud good.

It’s not just her voice but the way she owns any stage she goes out on. Dolly Parton would be proud.

The film is about dreaming big, certainly. But in country music those dreams are so often crushed by reality.

“Three chords and the truth” it says on the tattoo on Rose-Lynn’s arm, though its owner’s grasp on the truth is rather shaky at times.

But like every good country song, redemption may come late, but it does come.

The pleasures of Wild Rose aren’t so much about fame and fortune, even if, ironically, that’s likely to be the future for star Jessie Buckley.

It’s about the joy of music, rather than the lust for fame. There’s something inside and it’s got to come out - give that kid a microphone!

So did I respond so well to the film because I’m rather fond of this sort of music, or because it boasted a great performance from a brand-new star, or because it’s a good, uplifting story?

All of the above, I’m sure.  But mostly I loved it because, for once, Wild Rose doesn’t depend on a brand-name title, or a familiar predecessor.  It’s just itself, and it’s a knock-out.