In Nadine Labaki’s Capernaum, a 12-year-old boy, in a Lebanese prison for stabbing the man who married and then killed his 13-year-old sister, sues his deadbeat parents for bringing him into the world.

Capernaum is a bracing, street-level view of a world where children are mostly a combination of fuel and cannon-fodder. 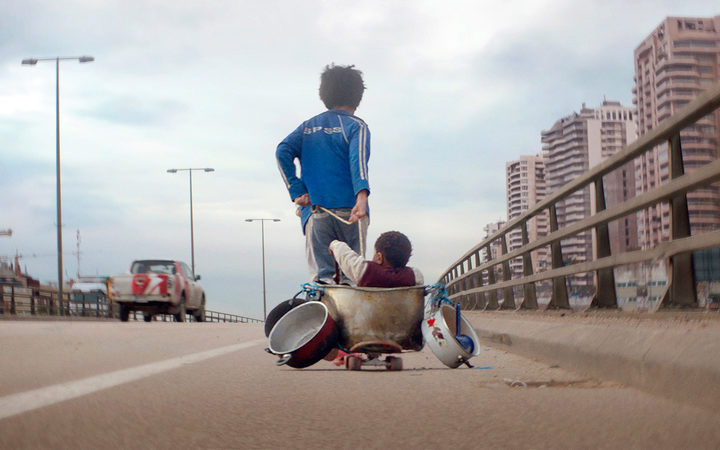 Our 12-year-old hero is named Zain, also the name of the young actor playing the part. In reality, Zain Al Rafeea is a Syrian refugee, discovered by Labaki in Beirut, but he plays a Lebanese boy – one of seemingly dozens of children to a feckless, petty criminal couple who are not above selling one of their own daughters for free rent of their crappy apartment and some chickens.

Disgusted by his parents, Zain hops on a bus with not much more than his wits, and discovers an amusement park where he can hide, sleep and bum the occasional meal. He meets Ethiopian guest worker Rahil (played by real-life Eritrean refugee Yordanos Shiferaw) who takes him in as long as he can look after her baby boy Yonas during the day while she works.

All these actors – and I’m including the baby girl playing little Yonas – are nothing short of miraculous. The director, Nadine Labaki, and her casting director, Jennifer Haddad, spent months scouring the slums and souks of Beirut looking for just the right faces to represent their own lived experiences on camera.

Rahil is picked up by immigration and doesn’t make it home. Zain has to use all of his street-smarts to try and keep the baby alive while he searches in vain for Rahil, with the dubious help of an unscrupulous Souk stallholder, fake-ID seller and possible people-trafficker Aspro. In real life, Shiferaw, the actress who plays Rahil was also picked up by immigration during filming and detained for two weeks until the filmmakers could get her out.

After the film was finished, the parents of the baby actor playing Yonas were deported from Lebanon despite the baby being born in Beirut. But it gets worse than that – the girl’s mother was deported to Kenya and the father to Nigeria – entirely on the other side of the continent.

I’ve just realised another thing that Capernaum reminded me of and that’s Dickens. Innocent children like Oliver Twist, caught up in the unscrupulous affairs of inscrutable adults. And you have to ask yourself, how bad must life be in Ethiopia if the option of indentured service to a middle-class Lebanese family is preferable?

Labaki’s previous two films have been popular in festivals like ours here in New Zealand. Her first film, Caramel in 2007 was an easy-going slice-of-life about several generations of Lebanese women around the beauty parlour they frequent. In 2010, she made Where Do We Go Now?, a charming fable about a village where Christians and Muslims live together in perfect harmony which was not helped by the introduction of some unnecessary musical numbers.

But Capernaum is next level. Labaki has captured something awful – but something awfully alive – with her alert, mobile, camera, her patience – it took six months of guided improvisation to shoot and two years to edit – and her ability to work with dozens of non-professional actors to produce something like a Lebanese Ken Loach film.

Despite the visceral verisimilitude, Capernaum is also a bit of a fantasy. Zain is a representative of the many millions of children left to rot due to abuse, poverty, war and famine. And the uplifting ending – though totally necessary for audiences to not walk straight into the sea after watching it – also has a bit of a fantasy feel.

Capernaum opens in selected cinemas this weekend and is rated M for violence, offensive language and drug references. It should probably get an extra note regarding children in peril. If that’s a trigger for you, don’t worry, you should still go – just go prepared.