Rupert Everett on Oscar Wilde and The Happy Prince

There have been several films about the life of gay Irish playwright and celebrity Oscar Wilde - notably the two starring Peter Finch and Robert Morley back in 1960, and a more recent one starring Stephen Fry. 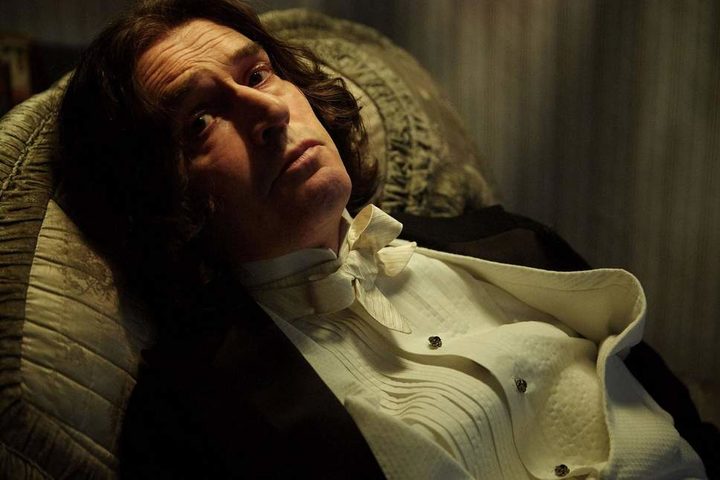 But the latest, The Happy Prince, starring and directed by Rupert Everett, concentrates on his last two years, and may very well be the best one yet.

Wilde spent his last two years in Paris in exile following, at the height of his fame, a scandalous trial and subsequent imprisonment for homosexuality.

Everett says the three previous films about Wilde's life all "cop out" and end before the final sad, act of his life.

"For one reason or another they just can't face up to really what was done to Oscar Wilde by society," he tells At The Movies' Simon Morris.

"For me, I suppose, having negotiated a career all these years as a gay man in a largely boys-club-ish business like show business, this side of the story - the passion of Oscar Wilde, in a way the destruction of Oscar Wilde at the hands of society - is the story that I wanted to tell."

Everett says Wilde's persecution for his sexuality is very much a story for today.

"If we take the whole globe, in three quarters of it it's still a life and death challenge, your sexuality. And even in our world, where we have made such vast strides in the last 117 years, we're still a minority.

"So I feel this story is still a story for now and we still have this amazing obsessions about sexuality in the world."

Wilde's life as the toast of fashionable London interested Everett less than his decline and premature death at 46 in a shabby Paris hotel room.

"One of the things I knew in the very beginning because of the other three films, the territory of his fame and rise to fame and being the life and soul of the Café Royal ... I knew I didn't want to deal with very much with that, what I was really interested in was dying and his deathbed.

"What happens to a man when he starts dying and his brain starts collapsing almost like a cliff edge crumbling off, and there's memories locked inside it coming out. I didn't want to write a conventional bio-pic from A to Z of a famous person's life, I wanted it to have a mysterious and magical quality."

The film takes the form of a dream, Everett says.

"At the beginning of the film, he [Wilde] looks at the camera and says 'it's a dream'. And then he takes the camera on this journey through his last days in which his brain takes one last look at the past."

Wilde was abandoned by his most of friends following his release from prison, Everett says.

"What's difficult for people to understand now is it was just death for someone to be seen with him, you needed to be very brave to consort with Oscar Wilde.

"He was literally the devil to the English people ... most of his friends fell by the wayside, when he lived in Paris he would see them crossing the road to avoid him."

Some friends stood by him however, among them Robert Ross and the cause of his downfall, his lover, Lord Alfred (Bosie) Douglas.

"Bosie - in a way he destroyed him but he never turned his back on him completely."

The very notion of homosexuality was alien to British society until Wilde's infamous trial, Everett says.

"No one would have really known about it [homosexuality] except for the people they were doing it with, for example women would never ever, ever, ever have imagined it, because they would never have talked with men about sex anyway,

"So when you saw Oscar Wilde walking down the street in Paris - and remember, he was famous: even without photographs and television people knew that it was him - people would point at him and say that is this new thing, a homosexual man.

"And to name is to know: once that name had come out, then the road to gay liberation could get going."

Wilde was a contrary character, and made many bad decisions: keeping in contact with Bosie after his release from jail was one of them, Everett says.

"There he [Bosie] was, he was an aristocratic young man, he befriended this big star who took him out for dinner and gave him clothes and spent really tonnes of money on him but deep inside, Oscar Wilde to Bosie - who is an English aristocrat which was like being a saint - Oscar Wilde was an Irishman and to the English at that point, at the zenith of empire, the Irish were really at the bottom of the pile and so I think Bosie certainly looked down on Oscar inside himself."

Despite the grinding poverty of his final years, Everett doesn't see Wilde as a victim.

"He carves his own constitution, now it's on the street corner and not on the West End and he replaces the royalty and stars with lowlife - rent boys and petty criminals - and he holds forth in bars and on tables and performs.

"He's a great performer Wilde, he can't live without performing and he finds a new world to perform to and new friends and he's loved.

"I think his life, even in defeat, is wonderfully inspiring."

Over a century since his death, Wilde remains a towering figure in the gay liberation movement, Everett says.

"The gay liberation movement really started in 1900 with Oscar Wilde's death: that's when the whole thing took off, and we're still walking on that path now. Everyone in the LGBTQ community, he really is their patron saint or their Christ figure."

The progress made in sexual equality today would have pleased the Victorian Wilde, he says.

"He would hate being woke I think! But he would be fascinated by some things, he would be fascinated by the notion of marriage for example, but you can't really take a historical character, he's so much of his time, that last moment before Freud, before the 20th century, before modernism, before war, before suffrage, he's a comma in that whole phrase of major change, he really fits in there and no where else I think."

Everett says he has another script he's hoping to get made and a number of acting jobs "in the wings".

"I would love to make another film, making your second film is harder than making you first film. I don't know whether I'll pull it off, I'm quite old now.

"I'm pushing and pushing, you have to keep working in this business. If you stop and rest for a second, you drown - like an old shark."

The Happy Prince comes out on Boxing Day.