The new movie genre in town is - predictably in the age of Fake News - a sort of fact-fiction mashup. It's a variation on the old docu-drama - a fictional retelling of a true story, with real-life characters popping up every so often to add credibility. 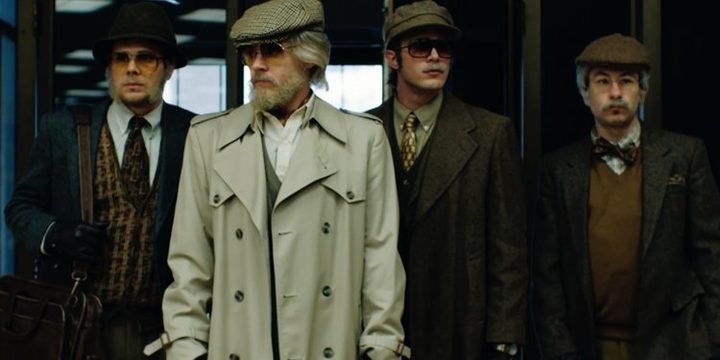 We've seen it in the Oscar-nominated I Tonya, in films like The Wolf of Wall Street. The Disaster Artist and this week, American Animals.

American Animals tells the true story of four young men from Kentucky who found themselves carrying out a robbery at their local university.

Writer-director Bart Layton chose to do both.

English director Layton made his name with another hard-to-categorise film called The Imposter, which allowed the title character to tell his own preposterous story and upend what was otherwise a straight documentary.

This time, much of the film is scripted drama, though we keep coming back to real-life figures who comment on the story.

American Animals continually plays with our expectations. The story of the four young men who went off the rails opens as we'd expect. There seemed no reason, say their parents. I guess we'll never really know why they did it, and so on.

But then the film sets out to show precisely how and why the heist of the valuable book took place.

The object of the attention of would-be artist Spencer and his best friend, the rather more flakey Warren, is a first edition of the famous J J Audubon Book of American Birds.

It's worth millions, and it's just sitting in the library of their alma mater, Transylvania University, Kentucky.

The two young men idly fantasize about carrying out the perfect crime. Then what began as a make-believe adventure turns into something more.

Spencer and Warren start to imagine a movie being made of the great Audubon Heist, and they prepare by watching every film of elaborate robberies they can find.

They realize they're going to need a bigger gang, and so they take on two more accomplices - the quiet, well-organised Eric and the arrogant, wealthy Chas.

With such an elite squad what could possibly go wrong?

And that's the second question that American Animals sets out to answer.

With all the planning, with all the examples of movies like Reservoir dogs - they even start calling themselves Mr Black, Mr Pink and so on - you'd think success would be a foregone conclusion.

But movies and real life are different - and as the wheels fall off the attempted Perfect Crime, we also intercut between the way the real-life robbers remembered the events and what probably happened.

How accurate is their recollection? That's the third question that often defies answering, not just here but in any documentary. Half the time the people themselves can't remember which version is the true one.

As Warren says at one stage "You're going to have to just take my word".

American Animals is often hilarious, and cunningly put together. It could also be one of those films where the novel style overwhelms any substance it might have.

But I don't think so. Like I Tonya, another film redeemed by its sympathy for the flawed lead characters, the questions it asks are too interesting to easily dismiss.