Scottish film Edie sees veteran actress Sheila Hancock - now well into her 80s - finally getting her name above the title, playing a woman who never got a chance – until now.

Back in the primitive past of British television, she was in a kitchen-sink sitcom called The Rag Trade with Barbara Windsor, and some may remember her on the arm of her husband - Inspector Morse himself, the late actor John Thaw.

In this film, she plays Edith Moore, who spent the last 30 years caring for her invalid husband.

When he dies, her daughter Nancy takes her to the local old folks’ home. There’s no song quite as depressing as a sing-along version of “Doing the Lambeth Walk”, and Edie can’t face it. 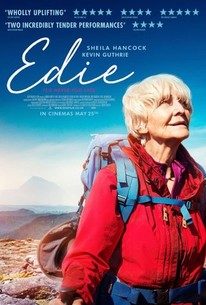 Looking through some old papers she finds a postcard from a former life, a picture of Mount Suilven in Northern Scotland. It looks like a big pyramid rising over the craggy banks and braes of the Highlands, a test for climbers half her age.

Edie’s not perfect, but it does get better as it goes along.  You want to know the character, and it’s a tribute to the cunning of Sheila Hancock that she lets you in gradually, rather than all at once.

The first thing you notice is the script is a little clunky and underpopulated.

Director Simon Hunter comes from a commercials background and it shows: it looks good, but it’s a little lacking in substance. To work properly, this story needed to be fleshed out with colourful Highland characters, a few subplots and so on.

However, the other thing you notice is the star. Sheila Hancock has the most extraordinarily expressive face – sometimes hard and flinty, sometimes warm and attractive, always in motion.

So, heading off to conquer her mountain, she literally bumps into - and is knocked over by - young couple Fiona and Jonny at Inverness station.

Fiona hurries off to catch her own train, while Jonny - young Kevin Guthrie, best remembered from the Proclaimers musical Sunshine on Leith - tries to make amends by driving Edie to her hotel.

Instead, he ends up joining her on her journey and providing some much-needed climbing expertise and experiences.

The unlikely mountain-climber and her coach bond as they go along, and start talking about their lives and what brought them to this spot.

It seems Edie has put off her big adventure to just about the last possible moment, while Jonny looks like he may never escape the one-horse town he’s trapped in.

It’s late in the film to bring this much plot in, but the story – and the star – carry it.

Like Edie, Hancock she is clearly a lot fitter than she looks, and works particularly well with Guthrie, so the film benefits immensely from its two leads.

You also really want Edie to succeed against the odds.  We’ve seen quite a few plucky older ladies recently, but none who have had to overcome so many physical obstacles.

Edith Moore the character achieves greatness. Edie the movie doesn’t quite do that, but it’s hard not to fall in love with the actor.

After all those years being on someone’s arm, Sheila Hancock readily steps into the spotlight.